Columbus, Texas, is conveniently located on I-10 at Highway 71, between Houston and Austin, and not far from San Antonio. It’s also a charming and delightfully haunted town.

That cemetery is on Walnut Street, not far from the middle of town. Its age is unknown, but the earliest headstone is dated 1853.

The more I read, the more this cemetery intrigued me.

I first investigated this cemetery early in March 2006. My photos revealed several crisp, clear orbs — even in daylight — and a photo that looks like ectoplasm. Here’s what I found:

Related Articles: (These links will take you to other websites.) 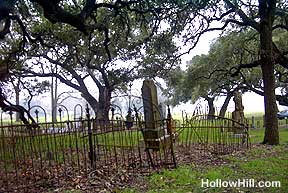 Columbus City Cemetery is one of the
most photogenic graveyards I’ve ever seen.

Columbus has so many interesting ghost stories, I wrote a full chapter about it in my book, The Ghosts of Austin.