Ghost Hunting and the ‘Witching Hour’

Do ghosts appear more often at the ‘witching hour’?

I’m skeptical, but – since I’m rarely awake at 3 AM (the original “witching hour”) – I have no idea. 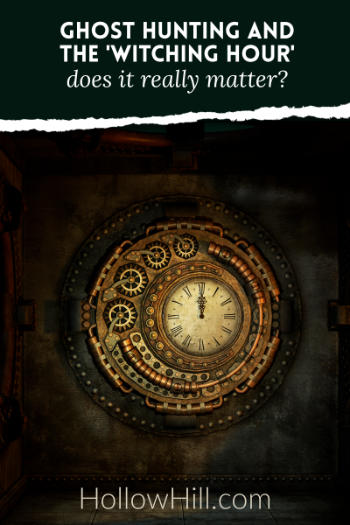 Researchers offer a wide variety of opinions about the best time for successful ghost hunting.

Some say dusk, others say after 9 p.m., some insist on midnight, and a few favor dawn.

I believe that – just as some radio stations are clearer at night – ghosts can manifest more clearly after dark. (See my article, When to Go Ghost Hunting.)

I think the answer is simple: Darkness eliminates many distractions.

There’s nothing mystical in that theory.

Also, it’s possible that ghosts are just people in another plane or dimension, and tend to keep their own schedules.

But, what about the ‘witching hour’ and its legendary power?

I’m not sure how much the “witching hour” has to do with actual witches.

They fall asleep soon after their kids do. That’s long before midnight, and sleep as late in the morning as their schedules permit. That’s especially true for parents of active toddlers.

You might assume the “witching” hour is midnight, or the hour immediately before or after midnight.

Well, if you look into history and folklore, you may be surprised at what you find.

But, for the time in which these ideas were explored, this was as close to “science” as anything was.

If you really want to delve into this: Some ancient farmers and scientists divided the night – from sunset to dawn – into twelve equal “planetary hours.” Those are rarely sixty minutes long.

To determine the actual hours of the night, start with the times of sunset and sunrise. You can find this information in any farmers’ almanac, or online.

Count the minutes between dusk and dawn, and divide that by 12.

Don’t worry if it’s 30 minutes or 105 minutes.  In this context, that one division – 1/12 of the darkness – is one hour. And, according to past traditions, each hour has a specific purpose, ruled by a particular planet. And, just to make this even more confusing, some planets repeat twice in one night.

(A free program can calculate this for you: ChronosXP is one of them, but it’s not always online.)

So, let’s say you want to experiment with this, to see if it has any effect on your ghost hunting efforts.

It means that you’re interested in where that concept came from, and if it has any bearing on real ghost hunting.

This is a scientific experiment, to see if planetary hours have any effect on paranormal research.

Since the Mercury, Moon, and Saturn hours are generally consecutive and give you three hours for optimum research, all three are listed below.

Think of these corresponding hours like the tides. After all, smart ship captains make use of the tides to set sail.

Ghost hunters can at least try these corresponding planetary hours, to see if this enhances their results.

Calculating your own planetary hours

I’ve never completed a comparative study to see if it helps to use planetary hours.

However, my best ghost hunting results usually occur on Saturday evenings, starting around dusk. That’s more about convenience – days and times when team members are available for investigations – than anything mystical.

If that works, test-drive days, too

If planetary hours work for you, here’s more folklore for your experiments:

Whether you take astrology seriously or not, it may be worth trying this.  After all, farmers have successfully used similar systems since forever, and many of them would be appalled if anyone suggested it was witchcraft.

A surprising amount of “folklore” has a scientific basis. This may be one of those odd-but-true guidelines we can use for paranormal research.

Your testing could be as simple as visiting one site on Saturday and Sunday nights, starting at about sunset.  Compare your results, hour by hour, and see if there’s any difference.

The Witching Hour, at Tufts and Needles – A light-hearted but nicely academic history and commentary.