Ghost hunting means something different to every investigator.

It’s natural to expect others to think like you about paranormal research.  You want them to be on your same wavelength… and maybe they are, pretty much.

However, no two people will feel exactly the same about ghosts and ghost investigations.

Before passing judgment on someone’s attitudes and research, take a second look. 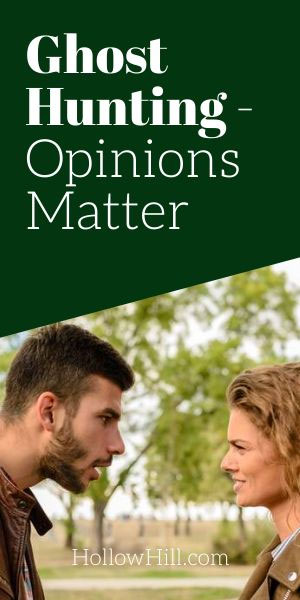 These differences make each of us distinct. They also help us bring new insights to paranormal research.

But, accepting those differences can be a challenge.  We all want to feel understood and supported.  This can be a very stressful field.

For example, I focus on “what if..?” questions and research methods.

I expect to be challenged, not just by eerie phenomena and anomalous discoveries, but by others in the field.

I know that some of my work might seem odd. Maybe even laughable, to some people.

Worse, people like me usually want to confirm our studies with lots of supporting evidence.  Until we do, we may not share our theories with others.

However, no matter how the person rates in those terms, one factor outweighs them all:  Is the researcher honest?

That’s not just about the work he or she is doing, but about his or her life, in general.  Without credibility as a foundation, no research theories or results can be taken seriously.

There can be no “white lies” in paranormal research.

Watch out for these issues

Those issues can extend into mental health areas, and it’s something team members need to be sensitive to.

But, at the core of our work, honesty is essential. It’s basic to genuine respect, within this field and among the public.

Mutual respect is equally important.  Once the professional slurs seep in, and reactive, defensive walls come up, we’ve lost important ground in this field.  Be aware of your biases, even when they seem well-founded.

In ghost hunting, everything is controversial

EVP is controversial.  We know that EVP is fraught with credibility issues.  And, so far – EVP isn’t my strong suit.  The fact that I rarely get good recordings at even the most haunted sites… that doesn’t disprove EVP as a viable research tool.

As an example of someone working with extreme EVP techniques, see what John Sabol is doing.  For years, his unique and flamboyant research methods have raised eyebrows.  I was impressed from the start, but I’ve heard unfair comments about his work.

John now has a track record that’s earned him respect, and he’s invited to speak at ghost- and archaeology-related events, worldwide.  But, even within paranormal research, many people have never heard of John and his work. That’s a glaring omission, and a symptom of a larger problem in this field.

Real-time communication is controversial, especially non-standard techniques such as loosening the light bulb connection in a flashlight, on-the-fly EVP analysis, and tools such as a Frank’s Box.  I’ve seen all three work, convincingly, over and over again.

I’ve also seen (and heard) results where I blink and think, “You’ve got to be kidding.”

That doesn’t mean these tools and techniques aren’t valid.

Until we can standardize and refine our research methods, results must be evaluated by people who were there, and on a case-by-case basis.

Often, our conclusions are the result of the aggregate experience at a location.

It’s difficult to convey that context to someone who wasn’t there at the time.

Sometimes, when I’m trying to explain why some minute anomaly interests me, I’m reminded of when I try to tell jokes. (I’m terrible at jokes.)

As I describe flat-out weird anomalies, I find myself steadily saying, “Oh. Wait. I forgot to tell you…”

And then I explain about the shadow figure.  Or the voice that the team recorded simultaneously on three different voice recorders, though no one heard anything like it in real life.

I’ve steadily maintained that photos can’t be the sole evidence of a ghost or other spirit.

And yes, I’ll admit that, for years, I was skeptical of most “orb” photos I’d been shown.

Then I spent six years studying what I thought could cause false photographic anomalies. Those included reflections, moisture, and dust.

I was wrong. Reflections are usually easy to identify. Moisture can be an issue, but it’s easy to spot, too. And dust… well, the jury is still out on that topic, but I think excessive dust at a site might be evidence, even if related orbs aren’t.

A note about insects in photos

Many people have sent me “fairy” and “alien” photos.  The pictures are charming, and I hate to spoil people’s fun, but bugs are commonplace at many research sites.

It’s key to know what they look like in photos.

At right, that’s a mosquito. It’s one of many bug-related photos I took, deliberately, as part of my six-year study of photographic anomalies.

Is that kind of photo always an insect?  I’m not sure.  So far, I can easily create fake fairy and alien photos, but it’s a mistake to think that – just because something can be faked, easily – it’s always a fake.

My best tip for recognizing when bugs might be an issue at an outdoor investigation:  Regularly check streetlights near the research site.

If you see insects flying around them, you’ll probably see insects in your photos, as well.

Defending what makes your own research unique, it’s easy to slight others’ research.   It can be unconsciously done, or it might be deliberate to align yourself (or attract supporters) who share that skepticism, whether it’s related to a specific researcher’s work, or a general category (such as ghost photos or EVP or EMF anomalies).

We need to become more aware of that easy habit – or misguided networking effort – especially as we expand into “what if…?” areas of paranormal research.

Set goals and focus on them.

Your goals will determine what’s important to you.  Whether you’re at a haunted site for personal experience, to help a client, or to help a spirit, know your goals.

And then, keep improving yourself as a researcher, not to become better than everyone else, but to contribute expertise and theories to the ghost hunting field.