Prepare yourself. This article is going to be very geeky. And a little weird. 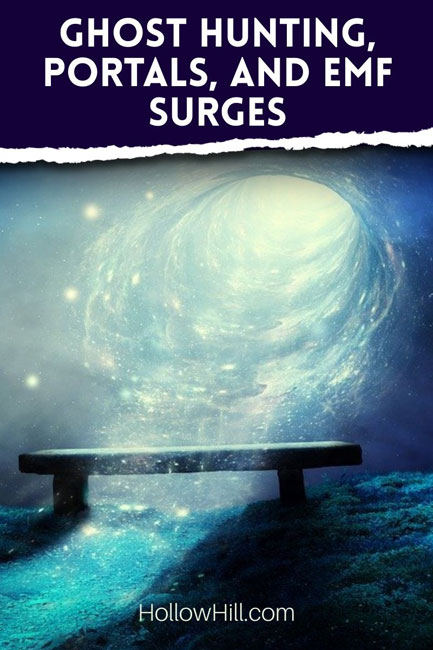 Those EMF spikes and surges may signal a portal, an opening between the worlds, or a time-slip.

Until the early 2000s, I shared these thoughts with just a few other researchers.

Even now, I’m uneasy explaining this, because I know how “out there” this can sound.

On the other hand, researchers with a background in science may enjoy this speculation.

So, here are some weird, off-the-wall ideas I’ve been thinking about.

Evidence at haunted sites raises the possibility that realities – or at least time – may be layered.

When it’s limited to the world we know, it may be described as a “time-slip.”

The Oxford English dictionary defines time-slip (a word in use since the 1940s) as:

(The occurrence of) a dislocation in the flow of time, in imagination or (especially) as represented in fiction, film, etc., by means of which travel between different periods of time is supposed to be possible; (also) the bringing together of different points in time, as a result of which events at one period may be perceived or experienced at another.

Or, when people are talking about worlds that are similar to ours, but also different – in time, space, or other features – the phrase might be “parallel realities.”

I think ghost hunters need to consider the possibilities. We may be stumbling over these events in our research, and not realize it.

One of the biggest markers of a time-slip or reality shift might start with those odd, one-off EMF spikes, surges, and bursts we see on our devices.

To understand this, let’s dig deeper into the topic of EMF.

EMF (or electromagnetic field/s) may be a physical field produced by electrically charged objects. That’s what Wikipedia says.

So, the four basic forces of nature are:

For now, I’m going to focus on EMF and gravity.

Gravity has fascinated me for years. It’s a force that doesn’t always make sense.

Physicists aren’t sure whether gravity is leaking into our world, or out of it.

But my question is: If gravity can leak across supposed brane barriers, why not another force of nature – EMF – as well?

Since the early 2000s, I’ve been focusing on unexplained EMF spikes and surges at haunted sites.

I’m especially interested in EMF spikes that happen just once during an investigation, but have no explanation.

Many ghost hunters enthusiastically claim that the EMF represents spiritual energy. Some say that it’s emanated by ghosts.

Then they look for continued EMF spikes, especially in response to questions and commands. (“Do that again” or “Approach this box again.”)

Likewise, they point to photographic anomalies and happily believe every one of those pictures shows actual ghosts.

If that makes sense to them, I’m happy to agree.

After all, they may be 100% correct. That would be lovely.

But privately, I’ve had questions. Not just about EMF readings, but other anomalies – including odd photos – and if all of our equipment might be affected by something we haven’t identified yet.

What if they’re not ghosts?

For years, I’ve been a contrarian. I’m not convinced that all EMF anomalies at haunted settings are actually evidence of individual spirits.

Yes, I believe in ghosts, meaning: spirits of the dead.

Also, I believe that consistent anomalies occur at sites we call “haunted.”

But I’m not sure that all anomalies (even at profoundly haunted sites) are caused by actual ghosts.

Here’s one way to look at anomalies at haunted places:

As I see it, some – not all – anomalies are caused by ghosts. But what about those that aren’t related to ghosts?

What if some EMF spikes occur – and odd images show up in our photos – when a door between realities opens, and — like gravity — electromagnetic energy leaks into our world?

To be clear: I don’t want to spoil anyone’s happy investigations.

I won’t raise an eyebrow if someone believes an apparition, an EMF spike, or even EVP is actually his/her/their Great-Aunt Harriet.

For all I know, that particular encounter might represent spiritual energy from the beloved aunt.

Perhaps that’s all the person wanted to get from ghost hunting. If so, that’s wonderful!

His, her, or their questions have been answered. They have peace of mind that Great-Aunt Harriet is in a better place, and still remembers her favorite family members.

However, my questions have been different. Some are based on personal experiences, including my impressions at haunted places.

To me, it seemed like many of them didn’t make sense.

At many (perhaps most) investigations, we encounter relatively minor phenomena. It might have a very normal (but weird) explanation like infrasound, high levels of carbon monoxide from a stove, or bad electrical wiring.

It might be what we call residual energy left by emotionally charged events in the past.

What makes them different? Even experienced ghost hunters are often astonished when they investigate those sites.

Those are the kinds of haunts that fascinate me. I’m still looking for answers.

Maybe they’re what some call portals… locations where “ghosts” and other paranormal phenomena are entering and exiting our world.

And, for a long time, I’ve suspected that EMF is also leaking through some of those portals (or access points between realities).

If that’s true, it’s possible that these points are also ground zero for time-slips.

Sci-fi and the fringe

Let’s go even further out on the sci-fi limb.

What if other civilizations or worlds have mastered use of these portals? For all I know, portals a form of travel that saves fuel or time, or both.

That could explain some UFOs, USOs, and other eerie phenomena in the “now you see it, now you don’t” category.

The Hum, mysterious booming sounds, and even EVP (recorded voices “from the other side”) might come through some of those portals.

I’m sure several other “out there” phenomena might fit this theory, too.

Here’s what that Venn diagram looks like, as I imagine it:

Or course, I’m not sure how likely any of this is.

But I won’t dismiss it, either.

As time passes, physicists are finding increasing evidence to support some of these theories.

For now, I think this is as good an explanation as any, related to EMF at paranormal locations.

Even better, it opens fresh avenues for research into a variety of odd and paranormal phenomena.

I’d raise an eyebrow if anyone insisted that all of this is true. I don’t think we’re anywhere close to understanding this, yet.

Meanwhile, I’m sharing this speculation because my “gut feeling” is: it’s a research path worth considering.

In 2008, this was part of my “Broome Theory” website, exploring connections between paranormal research and quantum science.