Haunted cemeteries can be ideal research sites for any ghost hunter. Whether you’re looking for a “good scare,” scientific evidence, or to help a lost soul “cross over,” many cemeteries are convenient, open to the public… and haunted.

Among the best features of haunted cemeteries are the gravestones. When you encounter a ghost, the nearby grave marker may tell you ghost’s name, and other helpful information.

That’s a great starting point to learn why the ghost haunts his or her grave.

(In my opinion, after you’ve encountered a few ghosts, their stories are what keep ghost hunting interesting.)

Some of the following ghostly photos may inspire you to explore nearby cemeteries. 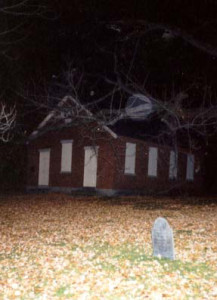 Yes, that’s an unexplained orb in the tree at Schoolhouse Cemetery in Nashua, NH.  (In the photo, the orb is at the side of the building, just above a boarded-up window near the front door.)

I took that photo at Halloween. The night was still. There were no breezes, and I was careful not to stir up any dust.

(I was still under the illusion that many – perhaps most – orbs were explained as dust particles reflecting the light from my camera.)

Next, here’s a photo of a group of gravestones at Pine Hill Cemetery (aka “Blood Cemetery“) in Hollis, NH, always seemed to photograph as if they were in a mist… even on a sunny day, like this one. 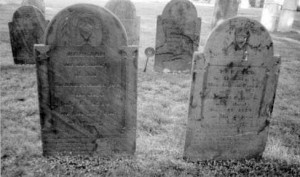 The next photo shows an unexplained streak of purple light at Gilson Road Cemetery, in Nashua, NH. 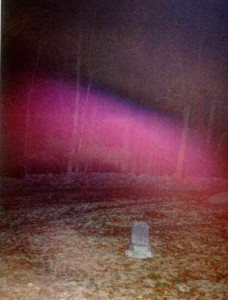 At the time, we saw nothing like this light. The picture was a film photo, and the negative showed no splashes or processing problems that could explain this picture.

It’s still among my favorites.

Gilson Road Cemetery is among America’s most haunted sites. You can encounter ghosts there, day and night.

Of course, there’s another reason to take photos at haunted cemeteries. It’s a way to preserve the memory, and document ghosts.

The next photos shows lovely figure of Mary Magdalene It was stolen from a grave at Vale End Cemetery (Wilton, NH), a few months after I took this picture.

Vale End Cemetery is one of the most dangerous cemeteries I’ve ever visited. In fact, I’m sorry I ever investigated it. Whatever haunts it… it’s more than just a ghost. 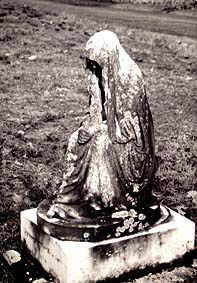 The next photo shows Abel Blood’s gravestone.  It’s at Pine Hill Cemetery in Hollis, NH. (That cemetery is one of many nicknamed “Blood Cemetery,” since members of the Blood family are buried there.)

It’s the same cemetery where I photographed the eerie daytime mist, in one of the pictures, above. 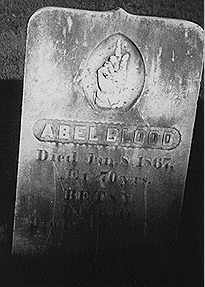 At Halloween (and perhaps other times), the finger on Abel Blood’s headstone is seen pointing downward.

Ordinarily, I’d doubt the tale. I’ve heard similar urban legends all over the U.S. and in other countries, too.

But, in this case, the person who told me about it had seen it himself. And, he was one of the most credible sources I’ve ever spoken with.

Since I posted this story online, Abel Blood’s headstone has been stolen at least twice. It may be back at Pine Hill Cemetery (Hollis, NH) by the time you read this. People who take the stone… they don’t keep it for long.

Frankly, I wouldn’t want to bring down the wrath of Abel Blood – or any curse he might deliver – by antagonizing his ghost, or whatever caused the finger to turn on the headstone.

In addition, due to vandalism (and outright theft) at that cemetery, the Hollis police patrol it at night.

The good news is, you can encounter some unique ghosts there, even in broad daylight. (My favorite was the ghostly cat.)

Ghost hunting in haunted cemeteries can be fascinating.

…Just don’t take anything home from the cemetery. Especially a gravestone.