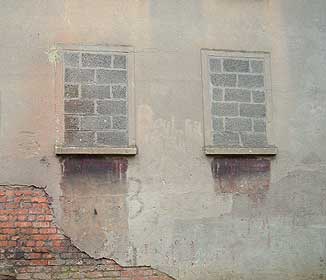 I’ve mentioned several at this website and in my podcasts.  However, here’s a summary of what I look for, with some examples.

Urban legends are fun, and generally worth checking out, just in case.  If I visit a local hangout — cafe, homemade ice cream shop, coffee shop — etc., and every person I talk with tells me about the same site, it usually has (at best) a 50% chance of being somewhat active.

However, when someone tells me about their own chilling encounter with a ghost, that gets my attention.  If several people tell me their own, unique stories about one site, I try to visit it immediately.

That’s how I found Gilson Road Cemetery, before anyone else had mentioned it online.

Lots of ghost-related stories, over a long period of time

Sometimes, locals don’t like to talk about their ghosts.  Too much media attention and visits by obnoxious thrill-seekers… well, that can annoy almost anyone.

However, when a location attracts consistent attention for many years, it’s worth investigating.  In my experience, only about 20 – 30% of those sites are actually haunted.  When one is actually haunted, it’s usually far more haunted than I expected.  The Myrtles Plantation is one of those sites.

If you’ve listened to my series of podcasts about The Myrtles Plantation, you know that I didn’t expect much when I arrived.  And, since nothing much happened (except an odd moment in the parking lot, and the eerie, swinging chandelier) until well after dark, I thought I’d get a good night’s sleep.

Look for ghost stories with 50+ years of haunted history.  A site that became “haunted” after 2003, when the Ghost Hunters TV series made hauntings popular, might be trying to cash in on a trend.

You might find some sites (with good, long-term histories) mentioned among contemporary listings, including the The Shadowlands site, and the past articles I’m adding at Hollow Hill’s Haunted Headlines.

However, if you have access to old newspapers for an area — especially 19th century records (even better if they’re indexed) — a trip to the public library might be worthwhile.  Save yourself time: First, ask the Reference Librarian if he or she knows of great, old haunts that almost everyone has forgotten.  Then get into the dusty volumes of old newspapers (especially Halloween issues) or the microfilms of them.

A popular restaurant in the middle of town might be haunted… or that might be marketing, to get more ghost enthusiasts to visit and buy a  meal.

A restaurant that’s in a prime downtown location, but nobody seems to go there… that’s a place worth investigating.  However, it might simply be bad service, high prices, or terrible food.  Specifically ask people around town why they don’t eat there.  If they pause and look away, and then come up with some thready excuse like “I don’t like the tablecloths,” or “The chairs aren’t comfortable,” it’s worth visiting the restaurant to see what’s really going on.  (Maybe the seating is awful, but you won’t know until you check it out.)

Likewise, look into any business that should be doing well — great location in a popular town — but it seems to change ownership every year or to.  In Salem, Massachusetts, there’s a two-story restaurant/club/pub that’s immediately in back of the The Burying Point (Charter Street cemetery, next to the Witch Trial Memorial).  It’s at the corner of Central Street and Derby Street, almost directly across the street from Brothers Deli, where I usually eat when I’m in town.

The club (or pub, or restaurant… it keeps changing) at Central & Derby Streets is a location with several ghost stories (one is so grisly, it seems unlikely). I don’t bother to put the name of it in my articles because it’s changed hands so frequently.  I think one previous owner even tried to play up the haunted angle… and the place still failed.  So, that’s a site I’d love to investigate, but it’s always been closed (between owners) when I’ve been looking for new Salem sites to explore.

If I were investigating haunts around Salem, MA, today, I’d also skip the places everyone visits and focus on sites connected with the Great Salem Fire of 1914.  That includes sites around The Burying Point (Charter St. cemetery) since the original Salem Hospital — occupying several buildings at and near 31 Charter Street — burned to the ground in that fire.  Any former hospital site is often spiritually charged.  Add a tragic fire and the ambient energy of Salem, aka “Witch City,” and you have a winning combination for possible ghosts (or at least residual energy).

While places like downtown Salem are so small, most real estate is occupied, other towns, cities, and communities may have haunted locations.  Those were once popular and bustling, but now they’re deserted.  Look for the cafe on the edge of town, where traffic was heavy until the new highway went in.  At the very least, those are sites of broken dreams.  Residual energy is likely there, if not ghosts of past patrons and owners.

And, while you’re in that area, look for nearby, neglected city or church cemeteries.

Speaking of cemeteries, remember that early towns often put their cemeteries on what was the edge of town.  They didn’t want reminders of death in plain sight.   That’s especially true of non-religious cemeteries where “paupers” and criminals may have been buried.

Depending on how the town or city sprawled, you can find good, haunted cemeteries in the middle of town… or in an area long abandoned as the population moved in a different direction.

Of course, deserted areas are always risky.  Take sensible precautions.  Explore those sites with a group, never alone or with just one other person, especially at dusk or after dark.

I’ve mentioned that hospital sites — now abandoned or replaced with something else (like the condos in Danvers, MA, not far from the Salem) — can be very creepy and worthwhile investigation sites… with permission.

Former sites of jails, housing for 19th-century factories and mills, funeral homes, and estates that were destroyed (for any reason) can be surprisingly good. If you can find an old theatre (for stage performances or even an early movie house), that’s usually reliable, as well.

You’re always looking for locations connected with one or more of these “hot” topics for hauntings:

Money can be about control, greed, or poverty.  (Extremes usually add power struggles, drama, and tragedy, almost by default.) It can also be where the will was read, and rich old Aunt Hazel left every cent to her favorite chihuahua.  So, never overlook where lawyers’ offices used to be.

Power struggles may have occurred at the main office (or in the yard) at 19th-century factories.

If you’re looking for drama, find out where banks had been located… the ones that collapsed in the Great Depression.  Also find out where soup kitchens were in that era.

Sometimes, the “tragedy” aspect is a fire, a shifting population, the complete failure of a business (manufacturers of hooks for high-button shoes, for example), and so on.  At other times, the tragedy occurred at home.  In the 19th century and earlier, suicides often occurred in carriage houses and other outbuildings.  In strict families where the younger daughters couldn’t marry until the oldest daughter did, you might find residual energy (or ghosts) in their former homes.  (You’re also looking for broken hearts — and people who remained single — because they weren’t allowed to marry across social, religious, or ethnic boundaries.  That’s not just the 19th century and earlier… it wasn’t unusual through the middle of the 20th century.)

In general, start with popular (and forgotten) “ghost stories” and then look into local history for sites that match the profiles listed above.   Most communities have at least two or three overlooked haunts.  They might be obscure, or hiding in plain sights.