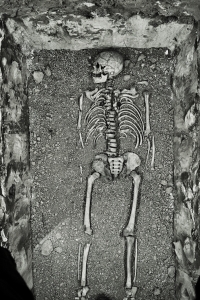 Experienced ghost hunters routinely check the history of the areas where they’re investigating.  When it’s a new house that’s haunted,  I look for what was there before the house was built.

In the Americas, when it’s a truly weird haunting — a candidate for another Amityville horror story — we look for really early history, usually Native, early Colonial, battleground, or pioneer records.

If the home has a geographically advantageous placement — such as a hill or a site with panoramic views — the history is likely to include a Native community or a burial gound.  More recently, I may find that an early American fort or outpost was there.  In the Americas, an early community or a fort can connect with one or more incidents of broad-scale violence at or near the site.

In the UK, the history of haunted location may be surprising, as well.  The Falstaff’s Experience at Tudor World — one of England’s most haunted sites, and the strangest I’ve investigated in the UK — is in a building with a colorful history involving blood, death, and more than one tragedy that spread across England.  However, the land beneath it (and nearby) has an even older history, with additional reasons why Falstaff’s is home to myriad phenomena. (If you think Stratford-upon-Avon is just about Shakespeare… you haven’t visited the Falstaff’s Experience after dark.)

Until recently, the ghost hunters’ challenge has been finding documentation of that kind of history.  Urban legends aren’t enough, even when there’s supporting anecdotal evidence.

John Sabol, a professional archaeologist, and Mary Becker have been impressing many of us with their startling results in ghost excavation research. (If you have an opportunity to watch them work, don’t miss it.)

However, many of us don’t have the advantages of a degree in archaeology, as John has.  We need access to archaeological information… at least enough to give us a guess as to what might have been at the location, and what we can rule out.

That’s when the Digital Archaeological Record (tDAR) can be among ghost hunters’ most useful resources. However, I’ll warn you: If you’re not a geek about this, and academic research puts you to sleep, that site may disappoint you.  For the rest of us — an admittedly small group — it’ll make your pulse race.

At tDAR, you can search for the history of your target location and its surroundings.  At a glance, you can see what time periods have been explored with archaeological digs, what they were looking for and what they found.  The map feature shows you whether the reference is related to your location or not, and you can focus your database search with exact GPS coordinates.

Though the actual records may not be at the tDAR site, you’ll know exactly what to look for at public and university libraries.  In many cases, those libraries have online catalogues, with notations about whether that book or report is in the library, or if it’s been checked out.

Thus is a huge step forward for aggressive and conscientious ghost investigators.

Over the past 20+ years, my paranormal investigations moved from “ooh, what’s that noise?” to in-depth research with historical documentation and geographical references.  Today, before I even visit a site, I’ve spent a full day with databases and maps, plus two or more days taking notes from dusty history books.  Stories and uncertain spectral encounters aren’t enough for me.

tDAR is the kind of tool you’ll use if you delve deeply into paranormal research.  As ghost hunters, we need historical resources that take our reports beyond “well, it might be….” to “here’s solid evidence to explain the history of what’s going on here.”

The majority of ghost hunters investigate to confirm activity at a site.  Many homeowners only need to hear, “No, you’re not imagining things.  Strange things really are going on, here.”  They’re happy to hear that, and the research team has enough other cases to deal with.  They don’t have the time or interest to dig deeply into why the house is haunted.  If the homeowner says something about someone dying there, a century ago, or a cemetery that used to be across the street… that’s good enough.  You don’t need to conduct more research at or about that site.

On the other hand, if you remain in this field long enough to want far more from ghost hunting and paranormal research, tDAR may be the academic and historical tool you need.