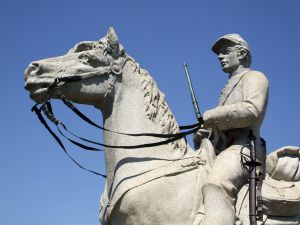 The biggest Gettysburg celebrations may be over for the summer, but I’d expect extra ghostly activity for several months.

Reenactments tend to stir up paranormal energy.  The bigger and more authentic the celebration, the more intense the hauntings during the event, and the longer the ghostly phenomena seem to linger.

If I were researching at Gettysburg, I’d visit the most popular haunts.

However, the problem is: Too much modern-day energy can dilute the older energy at the site.  That’s always an issue with haunted sites that attract a lot of attention (and ghost hunters).  Less-explored haunted locations may be better for serious investigations.

So, I’d also explore the off-the-beaten-path locations around Gettysburg and vicinity.

(They include the real haunts around Burkittsville, Maryland, made famous by the Blair Witch Project.  Burkittsville is 56 miles – about an hour’s drive – from Gettysburg.  See my articles: The real “Blair Witch” ghosts – Part One and Part Two.)

If you’re heading to Gettysburg for ghost hunting, the following article lists the top 10 haunts at Gettysburg.

Haunted Gettysburg: How Can We Deny the Authenticity of Other Worldly Spirits …
Student Operated Press, on Fri, 05 Jul 2013 04:54:38 -0700
After studying the Battle of Gettysburg intensely for more than two weeks, I`m convinced this scene experiencing three days of intense fighting between the Blue and Grey, is HAUNTED beyond description or belief! The basis for an abundance of paranormal …

If you’re looking for Gettysburg ghost tours, this summarizes the top six.

The first video is a 10-minute slideshow of various “ghost photos.”  While I can suggest normal reasons for many of them (the first could be breath, the third could be hair), a few of the photos are worth serious consideration.

A collection of ghost pictures and video from the North East Pennsylvania Paranormal Society from Gettysburg, Pa.

This next video is a well-produced, nine-minute, set of first-person stories about visiting the site of Pickett’s Charge at Gettysburg. The story told by the three men sound like a credible encounter with a residual energy haunting.  It’s unlikely that the same visual imagery would occur, over and over again.  In fact, the third man describes it as a “loop.”

As the tale continues, the conflicting numbers — and how Rich Mendoza explains them — are curious… and a little chilling.

I believe something weird happened to those men. Whether their story is entirely true or not,  it’s a great ghost story.

A sighting on the field of Pickett’s Charge

Planning to visit Gettysburg? Here are a few useful links for tourists: