One of Hollow Hill’s most popular real ghost photos was taken near the Guard House at Fort Worden, in Port Townsend, Washington, near Seattle on the night of April 4th, 2003.

When this photo was taken, colorful orbs and sparkles appeared all around me. Most of them were to my right and left, and I did not see them through the viewfinder of my camera.

I knew that I was getting some great photos that night in April 2003, but until I saw this print, I had no idea that I’d captured something this startling. 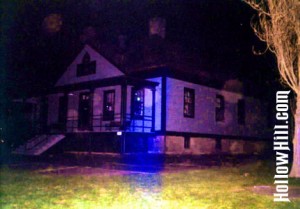 According to local legends, Port Townsend (near Seattle) is one of America’s most haunted towns. With Fort Worden–a former military base–plus the town’s colorful pirate history, you can expect ghosts… and plenty of them.

This real ghost photo was taken at Fort Worden’s haunted Guard House. Local stories claim that a soldier was assigned to the Guard House, but the loneliness of the work began to bother him. Whether it was carelessness or something else, the despondent soldier accidentally shot and killed himself at the Guard House.

His ghost lingers there today, and manifests often.

In two investigations, we found him to be a shy and sometimes angry ghost. This is our only clear photograph of him, taken during our 2003 investigation with artist, ‘Zanne B.

Read the full story of that investigation, with additional photos, in a two-part report starting at Fort Worden ghosts, part one

Fort Worden is a lovely park and conference center in Port Townsend, Washington State, about an hour from Seattle. Fort Worden is an ideal place to vacation, with a hostel and a campground on the property. Other haunted areas of the park include the Schoolhouse, the bunkers, and–maybe–the wooded area next to the cemetery.