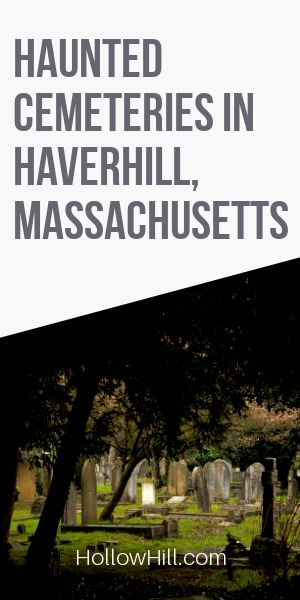 Are you looking for haunted cemeteries in Haverhill, Massachusetts?

Even better, they’re on a line that predicts where ghosts will be reported. (See my article, Find Haunted Places in Haverhill.)

My most memorable investigations were during dramatic tour of three Haverhill sites, thanks to the Essex Ghost Project.

Here are my notes from that eerie and fascinating tour:

Walnut Cemetery is large and has some very harsh, ghostly energy, especially around the Victorian-era graves.   I was immediately drawn to the large, crypt-style embankment, where bodies were once stored during the winter, until the ground was soft enough  in the spring to dig their graves.

Check it for EVP, and the usual EMF spikes, of course.

Next on that tour, psychic Gavin Cromwell was drawn to an area with a large tree… and an odd marker of cement and stone, left resting against the tree.   In that area, Gavin perceived the spirit of a woman in black. She was pointing towards the area where the flagpole is. She’s connected with something maritime, perhaps a sea captain.

Then, I was drawn to a hilly area with some of the oldest graves in the cemetery.  Some of the best photos of the night were taken in that area. So, be sure to use the flash on your camera or phone when you’re taking pictures… and take lots of them in that part of the cemetery.

A local historian and paranormal researcher – who asked to be unnamed due to his day job – accompanied us in this cemetery. He directed us to another set of graves, bearing the surname Ela.

We attempted to record EVP, but Gavin & I felt that male energy (either living or ghostly) was suppressing efforts by some spirits to communicate.  We came up with the word “sin” in connection with this.

Several investigators – including me – saw the little angel figure move, and both Gavin and I felt that at least one child (perhaps disabled, who died young) is not with his or her mother, Effie Ela.

In general, that cemetery is too large to visit after dark without a preliminary visit to see where the “hot spots” are.  Also, the energy is generally muted at first. You’ll need patience – and at least an hour – to get the most from your investigation.

However, once the activity starts surging, it’s worth the wait.

This burial ground includes a memorial to victims of a Native raid, and the grave of a Salem “Witch Trials” judge.

In general, it’s a chilling cemetery, even on a sultry summer night.

And yes, I mean “chilling” in more ways than one.

When we stood in a circle, holding hands, and asked Judge Saltonstall to make his presence known, the blast of icy air was astonishing.

Gavin felt certain that the judge won’t “cross over” because he’s sure that his destination will be Hell.  However, the judge was asking us to save Mary or help Mary… perhaps his wife or daughter.  (We didn’t think that Mary was still there.)

Nearby, a few graves set apart from the others – often indicating that they died “in sin” – are worth further research.

Before leaving, we searched for the grave of Polly Winters.

Gavin had felt the presence of Polly Winters during a Haverhill investigation in 2008, and – even before we saw the grave – he was certain that she was in this cemetery.

When Gavin said it, his voice was different. He didn’t have his usual introspective manner; it was like he was reporting the name on cue, not sensing it.

It’s still something that troubles me. In retrospect, the Polly Winters “psychic connection” didn’t seem authentic. I’m not sure where that came from, or why.

This cemetery is a gem for research, with apparitions and very clear spectral energy.  (That may sound dramatic, but the site is definitely unusual.)

However, until the cemetery has been cleaned up and some holes filled in, it’s not wise to go there… especially after dark when it is closed and patrolled.  (You will be arrested if you go there at night. We were there with permission.)

In a circle there, I felt the presence of a spirit saying, “Sheridan, James.”  I wasn’t sure if it was actually James Sheridan, saying his name as if reporting for duty.

Later, an Essex County Ghost Project historian told me that someone named James Sheridan is buried in that cemetery.

(Note: I rarely perceive names, and certainly not given and surnames in combination.  So, this had to be very intense energy for me to discern the full name with such certainty.)

Also, researcher Chris G. and I both saw an odd, squat figure – too large to be an animal – that vanished, as well as an apparition of a man, crawling along the far edge of the hill.

These Haverhill sites are definitely eerie, and likely to be haunted.  If you’re looking for ghosts, start at any of them and see what happens.

I think you’ll be impressed.

“Well-known paranormal investigator Fiona Broome will join the tour of Haverhill graveyards that date back centuries, as well as the walk of the Tenney property in Methuen…”

Haunted in Haverhill (Haverhill Life, October 2017) – Includes details of a Hilldale Cemetery investigation, and a list of other, nearby haunts.