At haunted places, many ghost hunters look for spikes in electromagnetic fields (EMF). Those spikes can be detected with devices like EMF meters and hiking compasses. 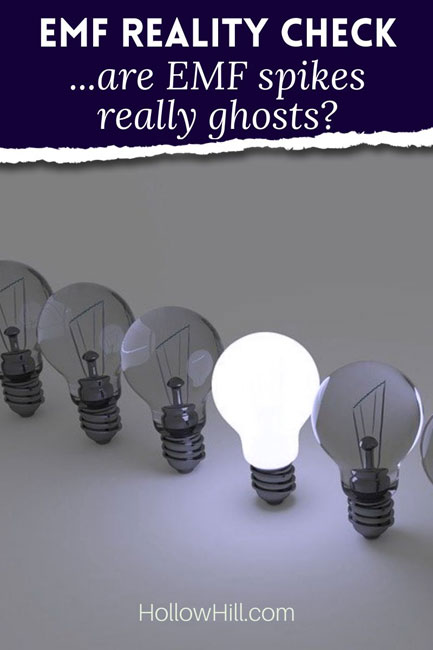 However, many ghost hunters think the ghosts create the EMF energy.

Let’s assume that humans have at least two parts: a physical body and a spiritual presence.

The spirit lives on, perhaps as a ghost.

But, in life, why don’t those spirits (or the bodies containing them) give off similar EMF energy?

It’s true that the human body contains some measurable electrical charge. Some people believe that bodies responds to magnets.

However, even on the highest setting, EMF meters rarely measure any significant energy spikes caused by a living human body… even a highly emotional one.

A body + spirit does not emit significant EMF spikes.

So, how and why would ghosts create them?

Here are the leading theories:

We don’t have enough evidence to know the real answer.

I lean towards the idea that EMF spikes indicate open portals.  I’ve talked about this before.

Physicists know that gravity is leaking into our world or out of it. No one is sure where the leaks are, or if they’re uniform across the unified field (aka, reality) that we inhabit.

Let’s say that most physicists are right, and parallel universes are real.  Temporary openings between worlds may involve a transference of energy from one side to the other.

Yes, I’m building on speculation. To me, it seems logical that EMF spikes indicate open portals (or doorways) between the worlds.

Of course, if that’s true, it leads to another puzzle: If ghosts are passing through a doorway or portal, it means that they’re not trapped here. In fact, they’re “crossing” back and forth regularly.

Also, I can debunk my theory with this question: If the EMF spike comes from the open portal, how do ghosts use EMF devices (meters, Ovilus, ghost radar, etc.) to communicate with us? Are they opening and closing doors between the worlds, to create the EMF spikes as replies?  That seems preposterous. (Not impossible… just unlikely.)

I’m not sure where this discussion leads, but it’s important to question why we have EMF spikes in haunted locations.

This article is part of the Broome Theory series.