Other eerie events at Blood Cemetery in Hollis, NH, reported by readers: 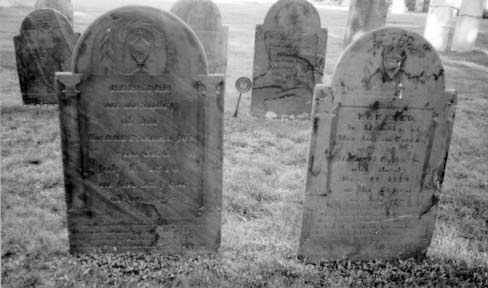 Trees moving when there is no breeze. Several have noticed this. It’s easy to compare the trees’ movement at Blood Cemetery with nearby wooded areas. In each story, the trees were still (not moving) elsewhere, but the trees were swaying and/or the leaves fluttering vigorously only within the immediate vicinity of Blood Cemetery.

“Fog” that slowly seems to engulf this cemetery and nowhere nearby, yet the cemetery is near the top of a hill. We have several independent reports of this, including one from a former policeman.

A Nashua nurse was in her car with friends, and they were listening to the radio. As they approached the cemetery, static interrupted the music, followed by dirge-like organ music. Shortly after they passed the cemetery, the static returned and then their previous music was restored.

There are natural explanations for this, but it is such a common story in the vicinity of haunted cemeteries in the northeast, and the nurse is otherwise very level-headed, so this tale is worth noting.

However, the Hollis police are rumored to play pranks on people near Blood Cemetery at night, to discourage visitors and vandals.

According to one police officer, they cover themselves with ghostly sheets, and hide behind the headstones.  When someone enters the cemetery, the police leap up, shouting, and chase the trespassers out.  This seems to be effective at keeping pre-teens out of the cemetery when the site is closed to visitors.

Nevertheless, we doubt that anyone’s out there with a fog machine, a wind machine, or broadcasting dirges on the radio.

“Blood Cemetery,” aka Pine Hill Cemetery in Hollis, New Hampshire, is one of New England’s most interesting haunted cemeteries.