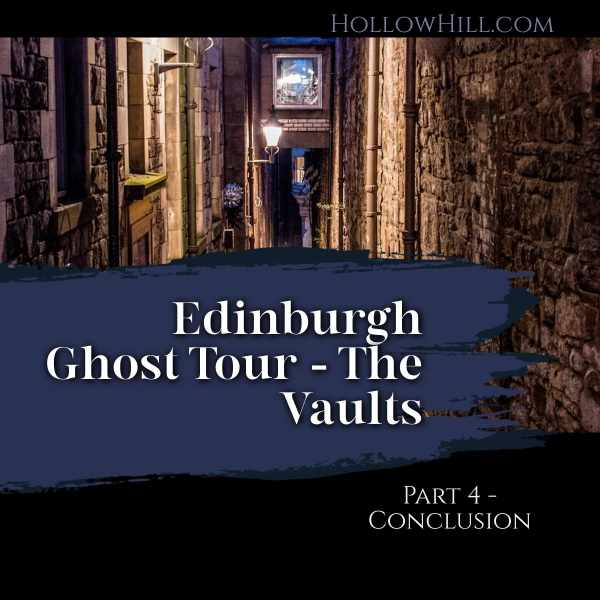 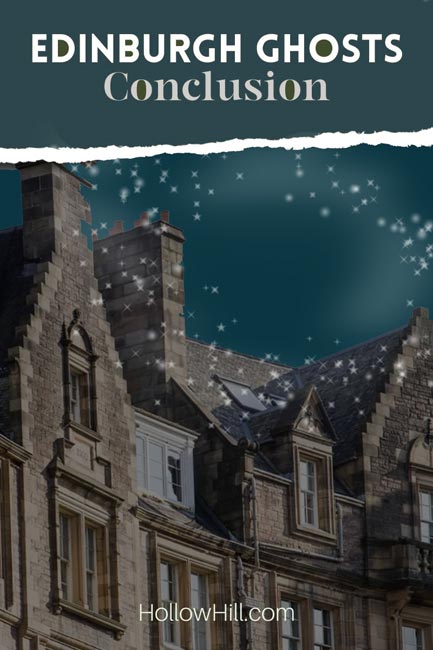 The rest of our return tour of the Edinburgh underground was troubling, so much that I did not keep notes at the time.

These are my current recollections of the site:

We walked through more rooms and then we were in a long corridor. At the end of it, I “saw” a crowd of people rushing back and forth, reminding me of subway platforms during the busy commuting hours. However, the people I “saw” were wearing clothing from a variety of eras, including modern-day.

I commented to one of the tour guides (I don’t think it was Ms. Mann), “Look at all the people down there!” The guide said that the area I was pointing at had been opened for Edinburgh foot traffic in recent years. She said it had been used frequently, and that would account for people in modern clothing in my impression.

Often, when I’m giving an important reading, I’m “given” situations that establish my credibility. I was certain that this was why I was prompted to mention the people in modern dress. I had no way to know about that tunnel, and it let the tour guides know that I wasn’t making things up.

Was that residual energy? A series of overlays, each from a different time, or “time-slip”? I’m not sure.

The ghosts in the storage room

We continued to two rooms that seemed like storage areas. I recall that the last one seemed to have a silly man behind the door. He was sort of folded up and on the floor. He didn’t understand that he was dead, and he was waiting for someone. He was truly preposterous; common sense should have told him that he was dead.

In retrospect, I now wonder if he was still alive in his own time. Perhaps I was just “seeing” – and communicating with – a person from another century. Or a person in a parallel reality.

This was a concept I first discussed in the late 1990s at Gilson Road Cemetery.

As of 2020, more people are considering this somewhat quantum theory,  and using the phrase “time-slip” in ghost hunting.

Then, towards the back of that same room, I encountered some grisly energy/images. I saw that there had been leather stored in the room.

Bodies had also been stored there, short term, after they’d been murdered.

The murderer had access to the room, and knew that the smell of the leather would disguise any odor from the bodies.

The ghost of the murderer

The murderer looked like the cartoons of (American) Boss Tweed: morbidly obese with a too-small vest that gaped too wide to be buttoned. His skin was greasy. He had stubble on his face. He was almost overwhelmingly repulsive. He dressed in dark clothing, except for a white, blousy shirt. He was gruff and aggressive, and seemed bitterly angry with life in general. He had lost faith in everything, and tyrannized others with his greed and rage.

Only intense experiences seemed to help fill the bottomless well of emptiness inside him.

Another energy with him was a frail little girl, about five-years-old in appearance, but her health was so poor and she was so skinny, she might have been older and simply looked small.

She had been murdered by the obese man, and was shattered by the event. I remember that her stick-straight hair was almost white, it was so blonde. She was pale and lovely, but too thin and dressed in a shabby blue or brown shift.

I know that she had lost her parents early in life, but had a vague memory of them. And, she had kept a doll from when her parents were alive, and she’d lost it around the time that she had been murdered.

At that point, I was overtaken by her grief, and started to cry inconsolably. As I communicated empathically with and for the little girl, I didn’t understand why this man killed small children.

He seemed relentlessly evil and cruel. He killed abandoned children of the streets of Edinburgh, and perhaps workers in what we’d call “sweat shops,” but this was probably well before the Industrial Era.

I do not know why he killed, and I’m not even certain if this crime spree was reported in the newspaper of the time. It was as if these children-and their brief lives-meant nothing.

All that I can say is, it was awful.

Then, the tour ended quickly

The “tour” ended then, quite abruptly. I’d opened myself too much to the available energy, and the grief I’d received from this little girl was too much for me. Distraught and embarrassed, I left the underground location with the group, apologizing for the sour conclusion to the evening.

We left Scotland the next day, and continued our tour of the U.K. and Ireland.

A month later, in Ireland, I met one of the tourists who’d been with the group on that return tour. She wanted to know if I’d been able to figure out the identity of Child #3, or anything else I’d witnessed.

I hadn’t, but I felt much better about the way the evening had ended when she said that my collapse into tears had not spoiled the experience, but in fact made it more “spooky” for her.

I’d love to go back and visit the underground areas again, though I expect that modern-day energy of tourists who’ve been through, will mute many of the impressions which had been crystal-clear in 1996.

I’d like to see other haunted areas in Edinburgh, and explore their stories, too. I have a strong feeling that I’m supposed to do this, if that makes sense.

I also hope to find time to review Edinburgh history, and make sense of the lives that I “saw.”

If you have additional information about these ghosts, Edinburgh’s haunted vaults or Mary King’s Close, please add them in comments at the foot of this page. Thank you!

Other articles in this series about Edinburgh’s vaults: