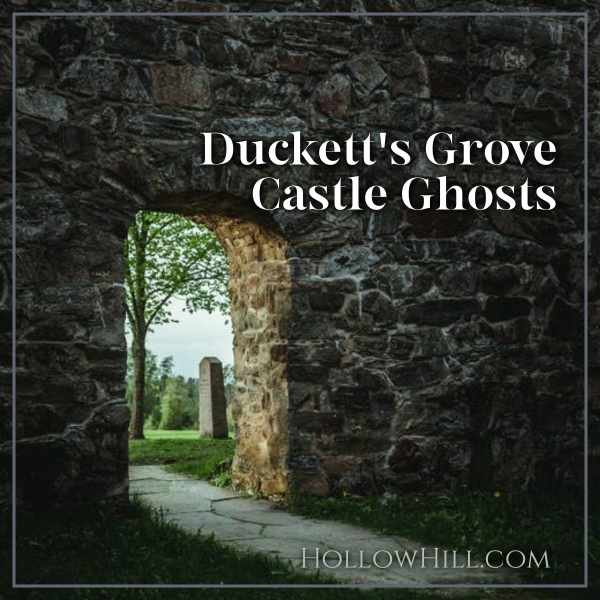 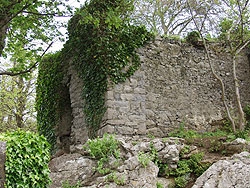 It’s so haunted, it was featured in a March 2011 episode of the SyFy TV show, Destination: Truth.

Unfortunately, the purpose of that show was to find evidence of Banshees.

I never recommend looking for Banshees.

Despite that,  Duckett’s Grove Castle (via Wayback Machine) and several local sites are well worth investigating, but for ghosts.

Duckett’s Grove Castle is in County Carlow, Ireland, about 40 miles from Dublin.

Driving directions: From Naas Road (Dublin), take the M7 to the M9 toward Waterford, and exit at the R418. Follow the R418 to the signed junction for Duckett’s Grove.

Parking is free, and parts of the site are wheelchair accessible. Some areas aren’t.

The castle grounds are open from 8 a.m. to 8 p.m. and admission is free.  After hours, you’ll need permission to visit or investigate ghosts at the site. 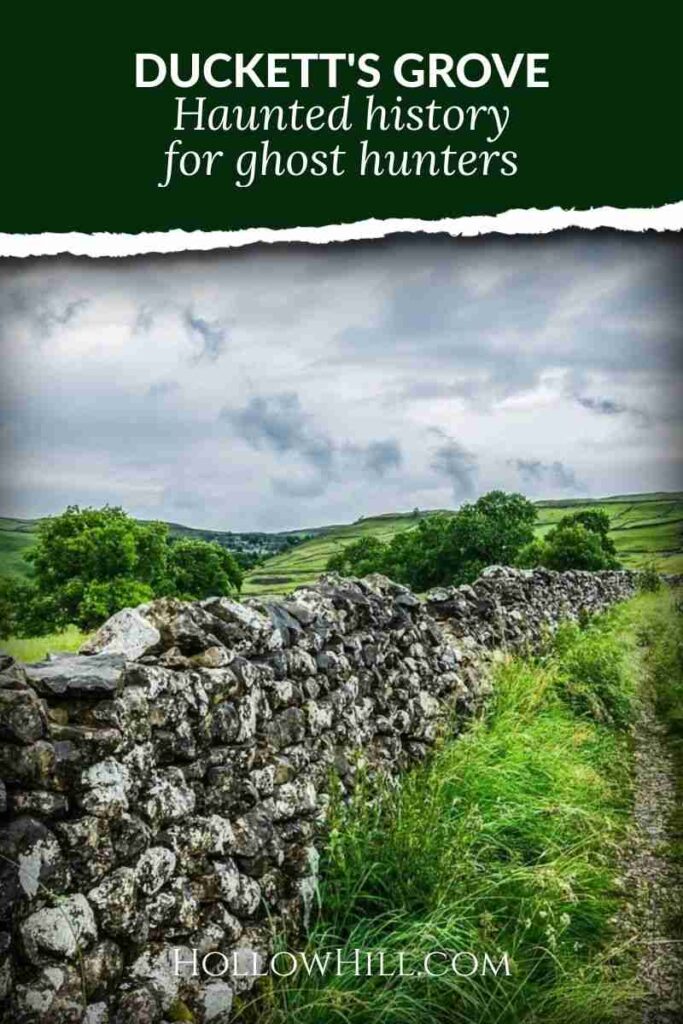 Duckett’s Grove is named for the Duckett family, originally of England.

Though the Duckett name is often associated with Ulster (Northern Ireland), it’s appeared throughout the Republic as well.

No matter where they lived in Ireland, most Ducketts trace their roots to England.  In 1572, Lionel Duckett was London’s Lord Mayor.

Some records indicate that the first Duckett in the Carlow area was Sir George Duckett of England; he arrived during the 17th century when Cromwell was a controversial figure in English politics.

That was shortly before 1669, when the Duckett Family Curse afflicted George’s English cousins, and – perhaps – spread throughout the family.

Two mottos have been associated with the Duckett family:

With mottos so strongly connected to justice, it’s easy to understand the politics of the family. And perhaps the curse.

Thomas Duckett – not George – is most often associated with the original house at Duckett’s Grove.

According to some historians, the house began as a modest cottage and was later enlarged at least twice.  The biggest transformation was made for owner J. D. Duckett by Carlow architect Thomas A. Cobden, around 1830.  That’s when it became a castle.

Since most of the work on the castle took place in the early 1800s, the building is usually described as “mock Gothic.”  In other words, the ruins aren’t necessarily as old as you might expect.

A tragic fire that destroyed much of the building in 1933.  The site is currently being restored and it’s a historic location with lovely landscaping and ruins.

The landscaped and garden areas are flat and have smooth paths.  You’ll need a flashlight after dark, but you’re unlikely to trip or fall there.

The ruins are less accessible, especially after dark.  Trousers, long-sleeved shirts, and running or hiking footwear are recommended.

Also, carrying anything related to the Roman Catholic Church is likely to evoke extra paranormal activity at Duckett’s Grove Castle.  At least one of the Duckett’s Grove’s former residents was scathingly antagonistic towards Catholics.

In the same general part of Ireland, I’d recommend researching Castledermot (exit 4 off the M9), where the area’s history — related to Robert Bruce and Henry VIII — could present spirits from Viking raids as well as more recent spectres.

While you’re exploring Castledermot, if Kilkea Castle is open, it’s one of Ireland’s oldest castle hotels.

If your paranormal research includes paragenealogy connections, you may have the best Kilkea ghost encounters if your family tree includes these surnames: Delacy, Delancy, Moore (or O’Moore), and Dempsey (or O’Dempsey).

For those with nerves of steel, the ring fort area at Mullaghrelan wood (near Athy and not far from Castledermot) is an important site. However, I do not recommend the risks if you’re visiting Mullaghrelan wood — or any fae-related location — at dawn, dusk, or midnight.

Athy has its own quirky history, and some may be intrigued by the literal roots of the town’s name: the ford of AE.

*In the United States, most people with the Duckett surname live in Arkansas, Georgia, the Carolinas, Pennsylvania, or Texas.  According to one (of several) family stories, three Duckett brothers left England in the late 17th century.  One died at sea and the other two settled in Maryland or around the Carolinas.

In the 19th century, most Duckett descendants in America were farmers.

In the U.K., members of the Duckett family usually trace their immediate roots to Yorkshire or Lancashire.

Scottish Ducketts are usually from the Dumfries area, Lanarkshire, or Stirlingshire.

What is a Banshee? A Ghost, a Faerie or Something Else?

Banshees and Ghost Hunting – In Ireland, the U.S., and Beyond