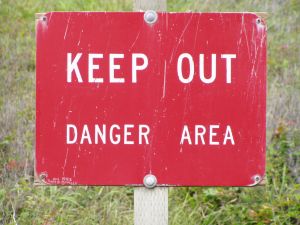 For years, many of us have been warning about dangerous aspects of ghost hunting.  From physical safety to legal issues, and from personal liabilities to spiritual protection, this field has more pitfalls than many hobbies and professions.

In general, the paranormal community can be divided into three groups:

I want to be sympathetic when someone is arrested for ignoring a “no trespassing” sign, or when they go to Vale End (or a similar site) and return home, terrified… a fear that stays with them for years.  I’ve warned about scams and con artists, and sleazy people who like the cover of darkness.

Physical injury and illness aren’t as unusual as I’d like, and — in most cases — the victim never saw the problem coming.

Obviously, experienced professionals usually know the risks and do what they can to minimize them.  Event planners try to organize activities so no one is placed in unnecessary danger.

A wide spectrum of ghost enthusiasts seem to be oblivious to all risks.  I see that in my email in-box, with questions and tales of woe, daily.

But, the symptoms aren’t only in my incoming email.  Looking for good videos to explain issues related to haunted Eloise Insane Asylum in Michigan, I found three videos with the following kind of content.  All were filmed by a group of kids, emulating Ghost Hunters.

First, they filmed the no trespassing sign.  Then, they ignored it and entered the property anyway. 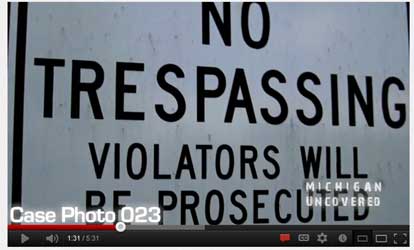 Then, they actually captioned portions of their videos, repeatedly proclaiming that they were on private property. 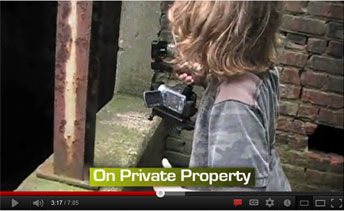 And, even when one of the kids said she was afraid to slip under the fence because she might be arrested, her friends talked her into breaking the law. 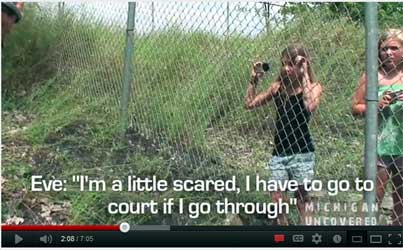 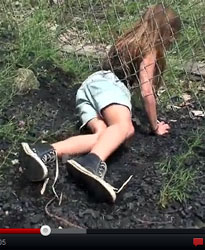 Okay, they’re 12-year-old kids, so you might ask, “Where were the parents?”

The answer…?  In at least one part of the video, the mom was holding the camera.

I don’t want to single out these kids as if they’re an example of the primary problem.  They’re not.  Adults are doing this kind of thing even more often than kids are.  This group of amateur “ghost hunters” just happened to put their videos online.  (Not a smart move, if someone calls Child Protective Services.)

My point is: Ignoring safety issues is a problem in this field.

Also, the trespassing issue isn’t isolated to this field.  From homeless people seeking shelter to urban explorers, plenty of people ignore “no trespassing” signs.  However, in many cases, they’re constantly aware of the risks.

The “no trespassing” signs are more than legal warnings.  Frankly, many people are let off with a warning, the first time or two that they’re caught… though I wouldn’t want to trivialize trespassing laws.

The bigger issue is what the “no trespassing” signs can indicate.  Often, those signs indicate safety problems.  They might include something as simple (but deadly) as asbestos dust or as urgently perilous as structural damage.  An issue might be toxic waste underground, or a site known for harboring territorial, poisonous snakes.

Here’s the reason for alarm: With the “no trespassing” signs prominently displayed, many site owners and communities figure they’ll make repairs later, when they have more funds to work with. They (reasonably) assume that the signs will protect an unwary visitor from putting him- or herself at risk.

The problem could be minor or it could be truly dangerous.  “No trespassing” signs rarely go into detail. (When I last checked, the fenced-off area near Gilson Road Cemetery in Nashua, NH, did not explain that it’s a Superfund site.)

But, don’t rely on “no trespassing” signs as warnings.  Sometimes, we’re called into homes and businesses (in use, not abandoned) with significant risks — structural and health issues — as we explore moldy basements and attics with rodent droppings.  So, every researcher needs to be aware of the dangers, as well as precautions to take.

Other dangers in ghost hunting

From blunders with Ouija boards to sleazy people groping team members in the dark, and from cult-like groups to adrenaline addiction, this field can seem like a minefield to the unwary.

The key word is “unwary.”  Once you’re aware of the risks, you can evaluate which you’re okay with and what limits to place on your research.

In the past, I’ve mentioned — and sometimes ranted about — many risks in my articles.  I’ve avoided covering those topics in depth because… well, that’s not the focus of this website.  In the 1990s, I wanted to interest people in ghost hunting.  After Ghost Hunters and other TV shows made my earlier efforts redundant, my articles shifted to education — including my free course — so ghost enthusiasts can get the best results from their investigations.

Also, risks need to be assessed on a site-by-site basis.

It’s one thing to go into a paved, haunted cemetery after dark, when — even though it’s posted — you’ll meet dozens of joggers and dog-walkers cheerfully ignoring the faded “closed at dusk” sign.

It’s quite another to go into an abandoned building, exposed to the elements, presenting a wide range of structural concerns.

So, I rarely go into detail about the dangers you may encounter as a ghost hunter.  Every site presents its own challenges and risks.

Now, a website (by someone else) is dedicated to the dangers of paranormal research.  It’s a topic that needs a central clearinghouse of information, and I’m delighted that someone has taken responsibility for that. Here’s the link:  Dangers of the Paranormal.