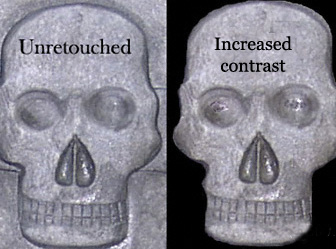 Ghost hunting becomes routine after years of research in eerie cemeteries. It takes a lot to startle me, but this tall, strange headstone did. And, every time I’ve visited it since then, I’ve felt that something isn’t right about that grave.

The skull is surrounded by a banner that says, “All must submit to the King of Terrors.”

When I took this picture, I was stunned by the emotional impact of the energy around the stone.

But, when I studied the picture, I didn’t see any orbs, streaks of light, ecto, or other anomalies. So, I filed the picture among the hundreds that I plan to use for illustration.

Later, I was using this photo for some digital art. Suddenly when I enlarged the image, the skull’s eyes became obvious to me.

Above (left side of the image), you can see the skull exactly as it was photographed. On the right, I’ve increased the contrast around the eyes, to make them more obvious.

I applied no art or linework to this image. It was a simple contrast adjustment. (You could do the same with the photo on the left, in Photoshop or GIMP.)

To the naked eye and in the cemetery, the eyes are not visible. Like many anomalies in haunted settings, these eyes are only visible in photographs.

How to take your own photo of these eyes:

From Route 128/95, take the Route 2 exit, driving west towards Lincoln.

When Route 2 turns sharply left, don’t follow it. Keep going straight into the middle of Concord.

At the rotary (Concord’s haunted Colonial Inn will be straight ahead of you), the cemetery is at your right. There is a private home on the east side of the cemetery, and a smaller, more empty grave area at the street level.

Sometimes, the eyes are clearly visible. On other visits, I’ve left with nothing interesting in my photos. I’d guess that I’ve had about 30% success capturing pictures of the eyes that watch from within that skull.

This the the top portion of this large, eerie gravestone: 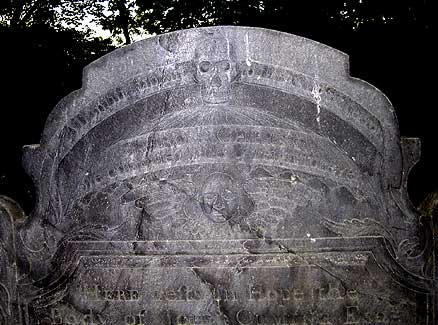