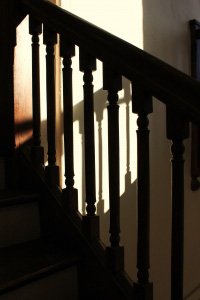 Hauntings — or reports of them — have increased at colleges and universities in recent years.

Apparitions, “cold spots” and poltergeists are becoming almost commonplace at many schools.

There are many possible reasons why we’re hearing more — and more credible — reports from colleges and universities.

The media have increased our awareness of the spirit world. Each year, new ghost- and paranormal-related films and TV shows spark fresh interest in this subject.

Researchers are making steady breakthroughs in paranormal studies.   When ghosts are in the news, people pay more attention to the odd things they’ve noticed… but previously dismissed as “just my imagination.”

And, as more ghosts are noticed, they manifest more often.  After years of being ignored, maybe they’re delighted that people are finally paying attention to them.

In addition, websites such as this one are able to inform more students about hauntings at their schools.  Once you know what to look for — and where — you’re more likely to recognize the ghosts and paranormal activity around you.

College ghosts are reported so frequently — and sometimes for just a brief span of time — that it’s nearly impossible for us to keep our lists up to date.

In some cases, the ghost is a poltergeist and it’s following one student. When she changes dorms, so does the ghost.

Poltergeist – From the German meaning “noisy ghost,” this term has been in use since the early 19th century to mean a spirit that makes noise, or otherwise plays pranks… often annoying.

Unlike other ghosts, poltergeists can move from one location to another, following the person they’ve chosen to torment.

Many psychologists believe that poltergeists are not ghosts at all, but some form of psychokinesis or remote activity.

Like many ghost hunters, I take poltergeists seriously.  I believe that some — perhaps most — are connected with ghosts or other spirits, and each one usually manifests in the vicinity of one specific person.

Sometimes, a college student’s ghostly encounter is sparked by a contagion of suggestion. One person convinces others that he’s seen a ghost, and his friends and acquaintances start looking for ghosts.

At many colleges, they’ll find them… perhaps more than they bargained for.

Whether or not we list a particular haunting, remember this:  Almost every older college and university has reported a ghost at some time.

We’re not saying that every college and university is actually haunted, but most colleges report a ghost or a poltergeist at some point.  We can’t personally confirm every story, but when multiple students describe the same ghostly phenomena… we take it seriously.

Hauntings are more commonplace than most people believe.

High levels of stress make colleges a prime target for residual energy hauntings. (These hauntings are energy — not necessarily lingering spirits — that remain in a location and can be sensed by later visitors.)

COLLEGE GHOSTS TO LOOK FOR

Almost every college that reports a haunting offers one of the following stories:

While pranksters do write to us regularly, most people genuinely experience something frightening when they report ghosts to us.

This is important: Many of these “ghost stories” are true, even when they echo urban legends.  Rampant ghost stories aren’t necessarily the product of imagination or simple contagion.  They might indicate an undisclosed or undiscovered history that could put some tales — and help some ghosts — to rest.