What kind of gift is ideal for a ghost hunter, without breaking your budget? Browse these ideas – from simple and under $10 to… well, elaborate far pricier.  (If you’re dropping hints, share this link with friends & family.)

The following suggestions were from December 2018, though most are still among my recommendations.

(Most links will take you to the GhostStop website, and I thank Graham of GhostStop – where I’ve shopped, online – for his insights. And, to be clear: they did not ask me to write this, and I’m not paid anything if you make a purchase. As always, my recommendations are blunt and honest.)

Every ghost hunter can use several of these budget items. So, if you’re not sure what a friend or relative already owns, consider these “can’t own too many” treats.

In fact, I go out of my way to carry equipment that uses batteries I can easily replace. Worst case, someone dashes to the nearest convenience store for replacements.

But, GhostStop carries a handy, very powerful USB Power Pack for on-site recharging. It’s easy to carry and lightweight. With that, you’re not looking – in the dark – for an electrical outlet. (Many haunted sites are abandoned and have no electricity, anyway). This kind of power pack can radically expand the range of battery-powered research tools you use. I love this idea!

Especially in older buildings, rule out structural/normal issues, before deciding the site is haunted.

You can buy a small carpenter’s level – mine fits into an outer pocket on my backpack – for about US$6 at Amazon. DIY home repair shops should have them at similar prices. 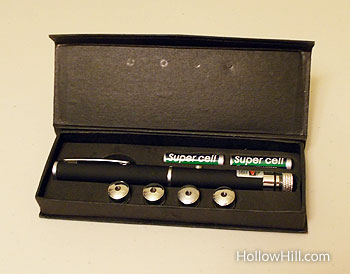 I own a laser grid scope, and love the convenience of it. It’s lightweight, and it can fit in a pocket.

Also, the grid is crisp and clear. If anything moves between you and the grid – like a shadow person or even a small orb – you’ll see it.

It’s best if you set it up – leave it on a flat surface that won’t be disturbed – and watch, or video the scene in case you miss subtle movements.

If you have deeper pockets, the Laser Grid GS1 will give you a better grid, so you can clearly track the up & down (or side-to-side) movement of the anomaly. If you’re investigating at that level, I recommend setting it up with a video camera filming everything that happens… for a minimum of 20 minutes. One or two hours is even better.

You can download the original Ghost Radar Classic, free, at Amazon.

I used that Ghost Radar app in Canada. The device indicated a mural – and told us to look at it – at a time when the artist’s signature clearly answered a question asked of someone deceased. (It was a rather personal experience, so I’ll leave it to Margaret Byl to add details, if she chooses to.)

If it hadn’t been for that experience – and a later one in a Concord (NH) cemetery – I would never take that kind of app seriously. (Note: it works best on a phone. I’ve tried another Ghost Radar app on my Kindle Fire HD 8, and – so far – the results weren’t impressive.)

Something for Every Ghost Hunter, Beginner or Pro

But, for set-and-forget ease – and high-quality recordings – a wrist recorder is my first choice. GhostStop’s EVP Band Wrist Recorder features one that has a battery life of over 12 hours.

(Added bonus: I’ve heard that it’s less likely to fall victim to “flat battery syndrome.” That is, it’ll keep running, even when other devices’ batteries can’t seem to hold charge.) 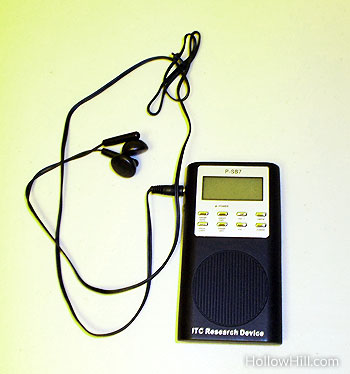 I own a Spirit Box SB7, sold at GhostStop. From my experience, how well these boxes work depends on the person using the device, or at least asking it questions.

Don’t let that scare you. I think it’s just me; audio devices don’t seem to be my strong suit.

I have evidence to support that.  With about 20 of us in a room – known for being very haunted – an actual Shack Hack sat silent for 20+ minutes.

Several of us took turns asking questions… and all we got was static or silence.

Then, John Zaffis entered the room and – about 20 feet away – asked a question.

Almost immediately, the Shack Hack started replying… and kept talking, and talking. I was impressed!

And, I heard an actual Frank’s Box in action, in Canada. It made me an instant believer.

That’s why I’m comfortable recommending one of these devices, including the Spirit Box.

(Also, if you’re ever at an event where I’m an investigator, ask to borrow my Spirit Box. I’d love to see it work well.)

My basic camera is usually a Nikon Coolmax, or whatever is their low-end, battery-powered model. (I also have a couple of DSLR cameras. I use them for follow-up visits, or at any site I’m fairly certain is haunted.)

In addition, and only if you’re already seeing photos with anomalies: Try a few photos with a film camera. An increasing number of researchers are doing this.

Disposable film cameras can be an affordable choice… if you can still find them. (Choose ASA 200 or 400, if you can. Amazon still sells these cameras.)

Video evidence can be compelling. So, you’ll probably want a few cameras – plus tripods to support them – to set up and leave running.

I was impressed when I saw the POV camera at GhostStop. It’s amazingly light, so – as Graham suggested – you could even put it on the brim of your hat, and just let it record everything  you look at.

It’s not inexpensive, but if you’re serious about your research, it may become your favorite research tool.

As Graham at GhostStop reminded me, there are four basic, environmental issues to check regularly, throughout a ghost investigation: EMF levels, temperature, humidity, and vibrations.

For EMF, you may like the classic Mel Meter. It provides EMF and temperature readings. (There are fancier models, too. I tend to prefer the “plain vanilla” versions of some tools. For me, they provide fewer distractions.)

I’ve seen astonishing results with the Ghost Meter Pro. (Yes, I know it looks far too “as seen on TV,” but – over a period of about six years, mine has been reliable.)

Honestly, when I’m dashing out the door to a short-notice investigation, it’s among the tools I always take with me.

It’s currently unavailable at GhostStop, and Amazon says they’re out of stock. I’ve seen some listed at eBay, but not sure they’re the real deal, or just a clone with flashing lights. I’ve sent an email to what I think was the original manufacturer. I’ll update this if/when I have news.

Meanwhile, take a look at GhostStop’s Rook EMF meter. In terms of what’s inside, it’s designed to ignore all the static and environmental EMF. Readings are more likely to be paranormal. That’s a big step forward. (I haven’t tried it yet, but I’m intrigued.)

If you want to buy something that can take paranormal research to the next level, consider extras like these.

The REM Pod is a love-it-or-hate-it kind of tool.  I’ve seen them (and similar devices) in use at many investigations, and the results can be startling… and baffling. I think it’s one of those tools we’re just starting to understand.

My only complaint about the REM Pod is that it can be hypnotic. Perhaps literally. I’ve seen far too many people sit down and watch the REM Pod for hours, and miss great, ghostly anomalies in nearby rooms.

For now, I think the REM Pod is a tool to use in tandem with other devices and with a video camera watching it, so you don’t have to.

But, if you want to give a ghost hunter a present that will impress – and one he (or she) can’t own “too many” of – the REM Pod is a very good choice.

An even more impressive gift for a ghost hunter…? A 360-degree camera + rig. It’s a big investment, but for someone aggressively looking for ghosts – or creating a video channel/show about ghost hunting – she (or he) could probably use several of these.

Of course, you can give someone a gift certificate from a favorite ghost hunting shop.

Or, you could buy a ticket (or two, so you can go, too) to a ghost hunting event, a ghost vigil, a ghost tour, or a convention where several ghost hunters will be speaking & sharing insights.

If you have other gift suggestions – or want to review (or share tips about) products I’ve mentioned – I hope you’ll leave a comment at this website. 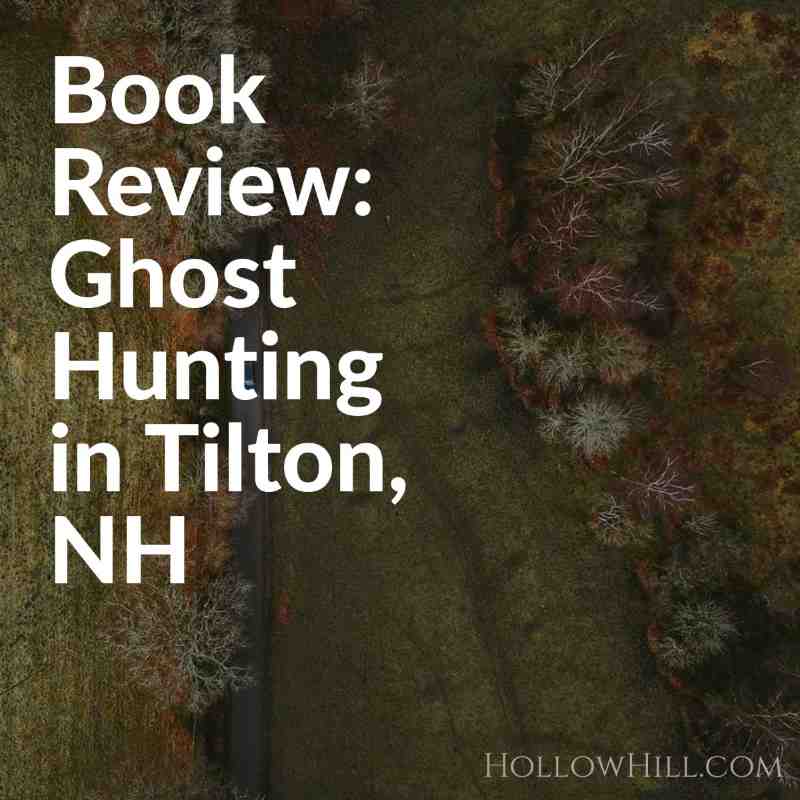 This isn’t my book, but it includes information from me, including a few of my Tilton stories. Other ghost hunters, including Lesley Marden and journalist Jim Fitzgerald, also contributed their stories to Rue’s book.

From the Amazon description: 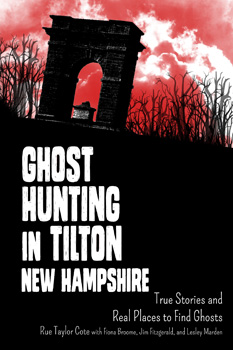 Is Tilton the most haunted town in New Hampshire?

After that, many ghost hunters came to Tilton and New Hampshire’s Lakes Region, looking for haunted places.

They found them… Lots of them.

Tilton may seem like a typical New Hampshire town.

After you learn about its ghosts, I think you’ll agree: Tilton is one of the Granite State’s strangest, most haunted towns.

I’m fascinated by the connections between the Tilton family and the Webster family.

Also, the Tilton area – very rural when those families moved there – seemed an odd place for two eccentric, powerful families to settle and, today, to be among the area’s ghosts.

I read this book in one sitting. (Yes, it’s short, but I was intrigued by the stories that were new to me.)

For example, the Tilton link to the popular book & TV series, A Handmaid’s Tale, was a complete surprise.

Something about Tilton seems… off. Weird. It’s like it’s a little too cute. Too “quaint New England.”

It’s almost picture-perfect… and then the Tilton Inn is so haunted, it’s been featured on Ghost Hunters and other TV shows.

Something doesn’t add up. Maybe the rumored stories – underground tunnels and eerie rituals – are true. And maybe their energy lingers today.

Like author Rue Cote, I’m curious about Northfield, too. I’d researched near the abandoned town center, without realizing anything important had been there.

I never knew about the hidden cemetery, either. I’m always interested in haunted sites that have been concealed for, oh, at least 100 years.

Tilton is a sleepy little New Hampshire town off I-93, in the Lakes Region. If you’re going to be in that area,  read this book to plan your own unique ghost hunting adventures.

(Also, if you have any Tilton-related ghost stories to share, leave them in comments. I’m very interested in that part of New Hampshire.)