What do Hollow Hill visitors believe in? That’s what I asked in a late January 2019 poll.

Here are the results: 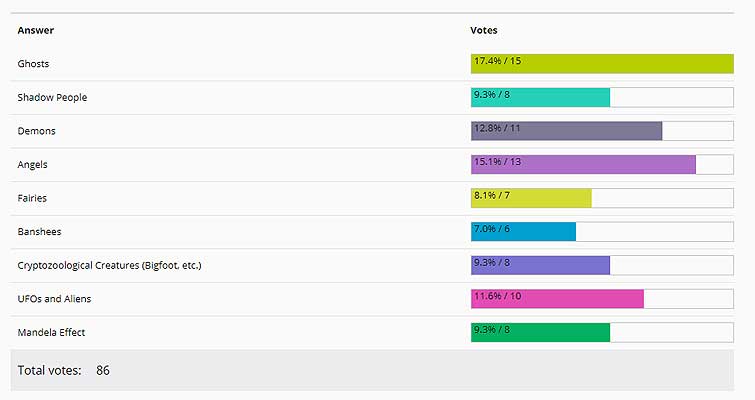 The votes represent about 3% of the people who visited that webpage. So, I’m not sure these numbers are reliable.

Why so few votes? I’m pretty sure one reason is concerns over privacy, and what data might be collected during the voting process. I understand my readers’ and fans’ concerns, though – in this case – nothing more than vote numbers were recorded.

In order, here’s what they believe in:

Ghosts – Since this is a ghost hunting website, I’m not surprised that most people believe in ghosts.

Angels – My readers tend to include many deeply spiritual people. So, the high range of ghosts isn’t a surprise.

Also, there’s the matter of the words we use. The creepy entity lurking in the shadows at the haunted abandoned hospital may be a “ghost.” But, if a deceased relative visits you, to be sure you’re okay, she or he is often described as an “angel” or a “spirit.”

UFOs and Aliens – That number surprised me. Oh, I’ve seen flying objects that were either UFOs or really, really good experimental vehicles. And the latter had to be very well-kept secrets, as well. (In Northern California, two of us saw a huge object – big enough to nearly blot out the sky – about 100 feet overhead. And it was totally silent. But, an air base was nearby, so – for me – whether it was a test vehicle or a UFO… that’s a coin-flip.)

With the number of my readers who conduct research late at night, often in isolated places with little light pollution, I probably shouldn’t be surprised that they’ve seen weird things in the sky, too.

Demons – Again, this isn’t a surprise. I didn’t believe in demons until I met John Zaffis and – in his presentations – he showed compelling evidence for evil, malicious, demonic entities.

Though I’m not sure where to draw the line between “angry ghosts” and “demons,” John’s experiences were enough to scare me. That’s why I don’t talk about demons very much; if an entity at a haunted site might be dangerous, I leave.

Shadow People – For me, this was predictable. I’m not sure what shadow people are, and if they’re a category of ghosts, or something else. But, having photographed one – and seen him, in real life – I’m sure they exist. And, they tend to appear at haunted places.

Cryptozoological Creatures (Bigfoot, etc.) –  Many use the term “cryptids,” and – though I’ve only had a couple of encounter with what might be a cryptid – I’ve heard enough first-person stories to take this topic seriously. It’s just not my field of study.

Faeries (fairies) and Banshees – This did surprise me, as I thought the Venn diagram of “ghost believers” and “faerie believers” didn’t have much overlap. I’m rather pleased to see more open minds than I’d expected. I believe paranormal researchers may need to expand how we explain – and think about – lifeforms and entities we encounter.

Thank you to everyone who participated. If you’d like to add your thoughts, I welcome comments about this poll and these topics, as they related to ghost hunting.

Do you believe in ghosts? What about shadow people, or demons, etc.?

Here are some general definitions, for this poll:

This poll is now closed, but you can see the results at What Readers Believe – Jan 2019.

We’re redesigning some of my websites, hoping to adjust the focus to meet your interests.  I created this survey to learn what interests you the most about ghosts and haunted places. Readers voted during mid-July 2018.

These are the results of the one-week poll:

Poll is now closed. Thanks for participating!