Poltergeist activity… is it ghostly?

What this means to ghost hunters

I’m not sure where these studies will lead us. But, anything that clarifies what the mind can do – among the living or the dead – can help us better understand haunted places.

This subject takes me far into the fringes of speculation. I know that, and no, I don’t take all of this as seriously as it may sound in text.

But, I do think we need to explore the “what if…?” questions, just in case.

So, here’s one theory: Like EMF spikes, tinnitus could be another marker, signaling a time or location (or both) where the “veil between the worlds” is thinner.

I’m especially interested in whether changes in tinnitus — a persistent or irregular ringing in the ears, commonly affecting about 10% of the population — are just more indication of increase EMF, or distinct markers in themselves.

However, I’m not the only person to question whether tinnitus and EMF might be related. For example, people have been discussing the connection at sites such as Tinnitus Talk.

I’m very interested in what people notice about tinnitus in relation to all kinds of EMF variations, and all kinds of paranormal activity.

This includes perceived volume, pitch, duration, whether it’s predominantly in one ear or the other, and if a compass direction is involved.

This is not about tinnitus cures, related medical symptoms, and so on. (Comments on those topics will not be approved. I can’t risk us wandering into “medical advice.” And, that’s far off-topic, anyway.)

My interest is fairly narrow, and focusing on any patterns related to paranormal activity and perceived tinnitus changes — before, during, or immediately after the event.

I’m also interested in tinnitus that increases at locations associated with sacred sites, ghosts, regular UFO sightings (I’m thinking of the Marfa Lights, etc.), and so on. 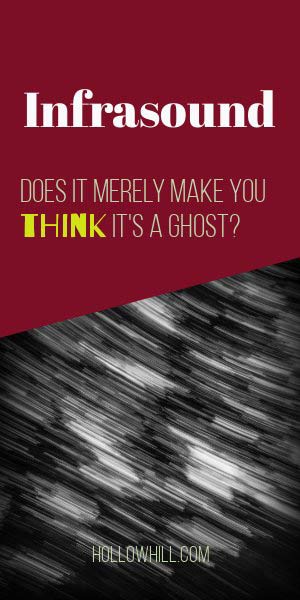 Many researchers aren’t considering infrasound in their current paranormal research.

In my own studies, I’ve seen a high correlation between infrasound and certain types of paranormal reports.

It may be more than an explanation for some ghostly anomalies.

It may also be something we can use in our research.

Yes, I’m aware of equipment that generates infrasound. Some researchers (and at least one TV show) use it in their investigations.

The problem is the effect of infrasound on the investigators. Those low-level sound vibrations can cause people to feel anxiety or even hallucinate.

Here’s a Mythbusters test, from Episode 193 of their show. It makes some good points.

As that video shows, you can be affected, even if you don’t think you hear anything unusual.

That means noting underground streams, nearby highways, and bridges that might produce infrasound.

Of course, that leads us back to the tricky question: Just because ghostly phenomena can be explained by something normal, is that always the correct explanation?

If you’re using infrasound – or have noticed a correlation with haunted sites –  I hope you’ll share your thoughts & insights in comments, below.

If you’re new to infrasound and want to know more of the technical aspects, here a starting point: check this PDF: Infrasound and its affects on humans.

And, if you want to get very geeky about this, you may enjoy Vic Tandy’s theories, in this PDF.