This is the second part of a two-part story.
It started at Houston – private cemetery, part one.

My favorite grave at this cemetery belonged to an older woman. I felt like I’d received a very clear message that she wasn’t very impressed with us, but she was just vain enough (in a cute, good way) to want some attention anyway. I was reminded of the nurse in the movie, Doc Hollywood. 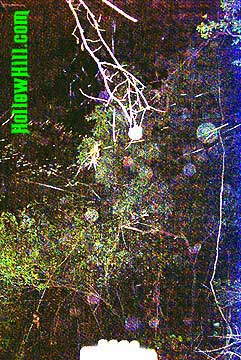 Out of respect for her privacy, I’m showing just the top of her gravestone… with dozens of orbs nearby. I expect that she was part of a large family — and she was a grandmother — so many of her relatives are in nearby graves. Her grave seemed to be guarded by one of the largest banana spiders I’ve ever seen, in a web that easily spanned a four-foot square area. It wasn’t easy to get past it to take photos.

The area around her grave is the most active with congenial spirits.

(There is another part of the cemetery, to the far left as you approach it from the street, that has a more derelict feeling to it. It’s as if those people died without much hope, and little color in their lives.)

The photo above also reveals a blue area to the right of the frame. It’s the only one with that kind of coloring, and I have no explanation for it. I wish that I’d taken more pictures, because this reminds me of the blue figure I photographed at Fort Worden, in Port Townsend, Washington.

I’m not sure if we’ll have another opportunity to visit this private cemetery near Houston, Texas. However, if we do, I’ll probably bring flowers for the grave of this charmingly eccentric woman, and hope that she reveals more of her life to me, and presents even more vivid images for my photos.

(2014 update: We didn’t have a chance to go back there.  Getting access to private cemeteries isn’t as simple as visiting those open to the public.)

This is not a cemetery to visit on your own. While we were there, we could hear gunfire less than a mile away. Our escort was armed, too.

But, most importantly, this is one of the many private cemeteries in Texas. Some were provided for people who couldn’t afford plots in city cemeteries. The people who rest in these private cemeteries probably didn’t want to be gawked at in life. It’s unkind to trample their graves–marked or unmarked–in pursuit of ghosts.

We visited with permission and tread carefully around the cemetery. We cannot provide further information about the location, the landowner, or how we were able to visit this site.

(Sometimes when we visit private sites, the terms of our visit include total secrecy.)

Nevertheless, it was a memorable visit, and far richer than many ghost hunts we’ve conducted at more popular, traditional cemeteries. 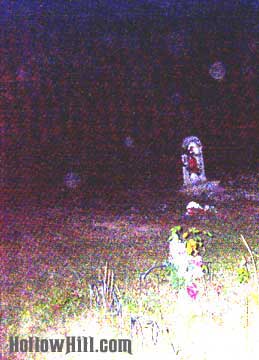 This small cemetery in the Houston area is on private land. We had permission to visit it, and an armed, authorized escort who knew where we should look for ghosts. From the start, I knew that this site was profoundly haunted. It reminds me of some New England cemeteries that I have visited, where the dead aren’t unhappy… just a bit restless and curious about visitors.

Because this cemetery is not regularly maintained, we walked through tall grass, pushed back shrubs and weeds, and dodged huge spiderwebs to visit the graves.

This cemetery is the home of people who — by choice or circumstances — have graves marked with wooden crosses, handmade cement and plaster “stones,” and are sometimes unmarked. Walking around these graves feels very different from the tidy cemeteries where the headstones were purchased and names were added to stock granite designs.

On this night, I saw many instances of “sparkles” from both my Olympus film camera as well as my Toshiba digital camera.

Many graves — marked and unmarked — displayed dramatic orbs. Because so many graves are unmarked, it did not surprise me to see multiple orbs in many photos.  Unfortunately, the location has so little light nearby, the photos are grainy.  That’s okay, I think you can see enough to understand why this cemetery impressed me.

One of the more formal graves — shown in the photo at the top of this article — produced consistent orbs. Here’s another photo of it, from another angle: 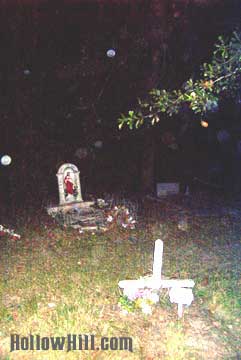 We continued to wander around the acreage, discovering more graves and many more spirits… as well as orbs. This is the kind of cemetery that must be treated with respect. These people are not “average” and their stories — like their lives — were rich, culturally diverse, and should not be trivialized or forgotten.

The marked graves may be as much as 50 years old. Most of them seem to be far newer, and visited regularly.

In the two pictures above, the left image shows how most of my photos (about 20 of them) at this grave turned out: No orbs. However, in the middle of these many ho-hum pictures, I captured one fairly spectacular orb in the photo on the right. About ten photos later, the wind started to pick up and there were abundant dust orbs.  This orb could be one of the early arrivals.  I’m not sure.

However, I sensed a very real presence at this grave, as if the person wanted to be noticed. There was a sense of dismay at being “out of the game” so soon. It wasn’t an angry or depressed spirit, just someone who knew that we were there and wanted to be included in the pictures.

Click here to read more about our visit to this eerie, secluded cemetery.

Ghost orbs continue to appear regularly around the Katy Historical Society’s depot building, and near the bright red rail car displayed nearby. These orbs can be explained in non-paranormal ways, but they’re such fun, I decided to post them anyway.

One of the most vivid photos that I took on January 2nd, 2006, was over the train depot: 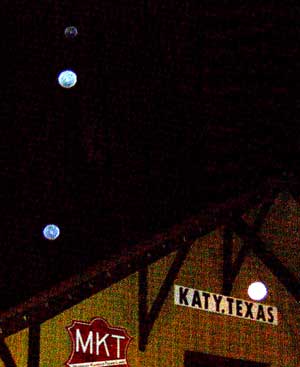 Oddly, some of the most visible orbs are also in a straight line, which I’d ordinarily discount as a lens flare. The brightest orb, over the word “Texas,” looks like a light bulb. It isn’t. It’s another orb. It was quite dark at the depot on that quiet Monday evening.

However, my favorite photo of the evening shows a bright green orb that–to me anyway–looks as if it has a classic Halloween “jack-o-lantern” face:

It’s not a perfect jack-o-lantern face, but this one caught my attention because the color is unusual, and the expression is different from the usual “smiley face” orbs. These are digital photos taken at a slow (100 ISO) speed, so they are more grainy than I’d like. At a higher film speed, I might have captured far more orbs that night.

It was an ideal evening for ghost hunting. Fog in the early morning hours had reduced dust and pollen as factors. By evening, the air was quite dry, but the dirt hadn’t dried out enough to be a problem. And, it was too chilly for bugs.