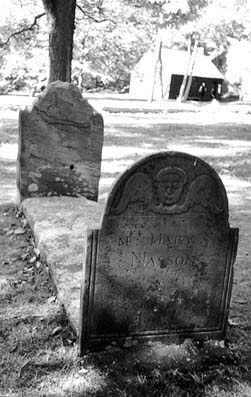 On 17 Oct 1999, I visited the Old Burying Yard on Rte. 1a in York Harbor, Maine. It’s a small cemetery on the side of the road nearest the water, slightly west of the downtown area. You can park in town and walk back to it.

On this day, I was searching for the grave of witch “Mary Miller Jason.” That was the name reported in at least one book about the ghosts of Maine, and at several websites.

Instead, I found a grave that matched the book’s description, but the woman was Mary Nasson, wife of Samuel Nasson.

(I’m fairly certain that the “Jason” spelling was originally a typo that spread as one resource copied another.  There’s a lesson in this: Double-check all resources, and don’t trust websites or books — even mine — until you’ve verified their research, yourself.)

I took several photos to document this grave, since — at that time — I was the only one who’d spotted the misspelled name. (Since then, others have used my website as a resource and corrected the spelling when writing about Mrs. Nasson.)

According to reports, Mrs. Nasson had been a successful and respected herbalist in the community, and she was also skilled at performing exorcisms.

Her portrait supposedly adorns the top of the headstone, shown below. (I’m not sure if that’s a tiny orb at the upper left corner of the photo.) 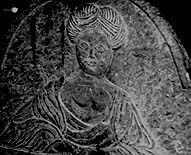 Mrs. Nasson’s grave is unique. Her husband erected a headstone and a footstone. As if those weren’t enough, he placed a heavy stone slab between them, covering the ground over her body.

Historians insist that Mr. Nasson placed the slab there to keep cattle from damaging the grave. However, earlier and later graves in this cemetery do not have that kind of “protection.”

The legend is that the stone was placed there to be sure she stayed in her grave.

I have difficulty believing that — if the cattle story is true — Mr. Nasson was the only person in York to care enough to protect a family member’s grave.

Mrs. Nasson’s grave is known as “Witch’s Grave,” and it is reported to be haunted.

Skeptical after the name was different from some published accounts, I put my hands on the stone slab covering the grave. Supposedly, the grave emits heat.

I’d expected some radiant heat from the sun. Instead, the stone covering her grave was dramatically warmer, only where it meets the headstone (the larger of the two grave markers).

The crows which frequent the cemetery in the summer are reported to be Mrs. Nasson’s “familiars,” still paying tribute to her. There were none when I visited in October, but I often saw the crows in the graveyard when I lived in York.

The inscription on the headstone:

Here liest quite free from Lifes
Distrefsing Care,
A loving Wife
A tender Parent dear
Cut down in midst of days
As you may see
But – stop – my Grief
I soon shall equal be
when death shall stop my breath
And end my Time
God grant my Dust
May mingle, then, with thine.

However, Mrs. Nasson’s grave isn’t the only eerie plot in the cemetery, nor the only reason why the cemetery may be haunted. For more information about the Old Burying Yard, see my other insights about York, Maine.