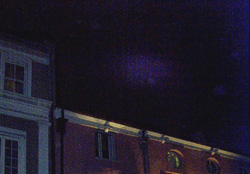 When there’s a normal explanation for a photo, I want to find it.  Sometimes, I can’t discover a good explanation.  Not one that works for the setting and the circumstances, that is.

That’s the case with this July 2005 photo at Brennan’s Restaurant on Royal Street in New Orleans’ French Quarter.

I’ve written about Brennan’s Red Room ghosts.  The photo, above, is completely unedited.  I didn’t even lighten it.  The picture was taken in July 2005, about a month before Hurricane Katrina.

It was a clear night, drier than most July nights in Louisiana.  However, because it was July, I’m discounting the orbs near the light-colored area.  I’m focusing on the light area itself. (No light-related puns intended.)

It was too hot to be using a fireplace, and Brennan’s kitchen is in another part of the building and fully enclosed.  There was no mist above Brennan’s, so that’s not a reflection of the street lights.  In fact, we didn’t see anything unusual when I took this picture.  It was one of those ‘gut feeling’ photos… that innate, perhaps intuitive feeling that something would show up if I took a few pictures.

We were across the street from Brennan’s, so my flash was too far away to highlight the air above the restaurant.  There were no skylights or spotlights that night, either.

If the light area were caused by something natural, we should have seen this ecto-looking area ourselves.

So, I’m not sure what the light area is.  It’s almost directly above the room where, years ago, workmen in Brennan’s saw a terrifying face outside the window.  (Those burly workmen were so frightened, they ran down the stairs and broke out through the locked doors.  They never returned to Brennan’s.)

Sometimes, anomalies in photos are simply odd.  There may be an explanation for this picture, but we can’t be sure.  For every ‘normal’ explanation,  at least three of us can argue convincingly that the normal explanation doesn’t fit the time, location and conditions of the photo.

I’m reluctant to label this ‘ecto’, because it could be something else.  However, it’s the subtle kind of anomaly that’s easily overlooked when you’re expecting orbs, a vortex, or something more dramatic.

For many of us, the subtle anomalies can be more interesting than the obvious ones.