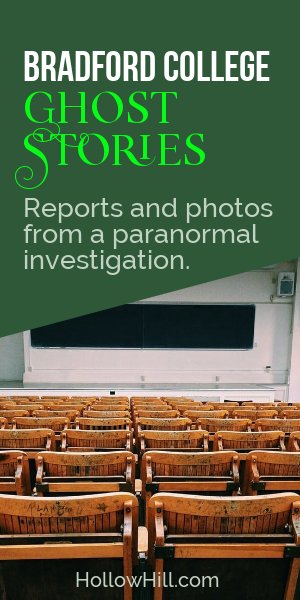 We weren’t expecting ghosts. Most of the stories were so fantastical, we thought they were urban legends.

The following is a brief summary of our March 2000 paranormal investigation, with links to my (online) reports.

The ghosts were real. We witnessed several of them, and then researched their stories. In some cases, evidence was scant. But, we couldn’t deny what we’d seen, heard, and felt.

Even more disturbing, the pond by the college dorms may be haunted… but it might not be a ghost. Whatever’s at that deeply troubling site, it could be something far darker.

Bradford College has closed. The site is now Zion Bible College. Do not attempt to visit it without permission.

Here’s what we’d heard about Bradford College’s ghosts, before our visit: 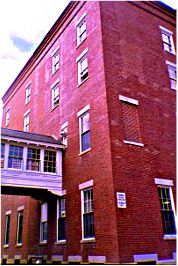 This building is the main building on campus, with offices and dormitories. The Academy Building is also the site of numerous manifestations, mostly focused on the “Amy and the priest” story.

According to one tale, when the college had been a girls’ school, a student (Amy) had become pregnant by a priest.

He tried to keep her quiet, and she eventually killed herself – or was killed by the priest.

There are several variations of this story.

We visited the underground tunnels linking several Bradford buildings. The tunnels are eerie, and troubling to explore. Our reports:

The stories from Denworth are more recent, but some are almost identical to the Amy-and-the-priest tale from Academy:

A student had an affair with a drama professor, or perhaps she was raped.

The ghostly student is generally mischievous, playing pranks on people in the theatre.

She does not like to be talked about. She has been heard singing “Hush, Little Baby,” in the upstairs part of the building.

Our visit to Denworth was easily the most dramatic encounter with an actual ghost on the Bradford campus. It was one of our last stops when touring Bradford College.

Those eerie events at the pond are attributed to the text mentioned in H. P. Lovecraft’s famous account of the Necronomicon.

According to local stories, the Necronomicon was buried in a secret tunnel that goes underneath the pond. The tunnel was sealed and its exact location is unknown. Because it’s so evil, the book may be guarded by demons, disguised as ducks… but the ducks’ behavior is so odd, few are fooled into thinking they’re just everyday wildlife.

The mist and stench come from Hell, because the Devil visits “his” book, regularly, usually at night between 10 PM and 3 AM.

These are the sites of a variety of stories, mostly related to the ghost of the little boy who drowned in the pond. He’s heard playing, particularly in the upstairs rooms of these two dorms. Tupelo West was the last stop on our tour of Bradford. Nothing dramatic happened there.

One of the most recent stories, where a foreign student (perhaps Japanese) checked into the dorm early. While alone in the building, he left his room, and upon returning, he saw bloody footprints outside his door. In his room, he found an old woman, covered with blood. Variations of this story place the woman in a bathroom, or a reflection in the mirror only, and she’s young and in a black dress or a white gown, covered in blood.

We did not visit Greenleaf House.

Other locations – There are several other, less famous stories of ghosts on the campus. We did not investigate them.

I revisited Denworth Hall in April 2000. I confirmed the anomalous, high EMF readings in the stairwell approaching the dance studio, upstairs. The fuse box is responsible for elevated readings approximately 8 inches from the box. The other high EMF readings on 11 March 2000 and April 2000 are still unexplained. The girl was still in the area, but I was deliberately blocking communications from her. My purpose in visiting that area was to check the EMF readings in a “non-haunted” context.

I also visited the actual upstairs theatre in the building.

There is a male ghost, or perhaps his residual energy, on the right side of the stage as you are facing it from the audience. He’s tempermental but not malicious. I think he’s from around 1930 or so, but he could be earlier or later.

He’s tall, lanky, wears casual clothing, but he’s not in a tee-shirt from the current era.

His “territory” covers an area of floorspace about 5 feet, square, in the wings but not in the rest of the backstage. I lean towards his presence being residual energy.

There is an entity above the stage, around the metal grid (“catwalk”) far above the stage. I did not like it. It “looked” black and human-sized. At the time, I did not think that it was, or ever had been, human. It seemed malicious to me.

Since then, people have told me another story, this one involving a young woman who hung herself from the catwalk.

To read about the entire investigation, start with our Preparations for Bradford College Ghost Investigation