Our first stop was a bathroom on the first floor, noted for odd condensation though is is an unlikely location for it. It felt a little odd there, but I found no EMF readings in the room. This was what I was expecting: minor “paranormal” energy levels, but nothing dramatic. Nothing that couldn’t be explained by overactive imaginations in an old building.

Next, we visited the second floor, near the radio station. This had been the focus of the “Amy and the priest” stories.

The area outside the radio station door seemed odd. There was legend of someone falling or jumping out the window there.

Through that window, I could see a windowed passageway from another building, and I felt that it was not good. Something unpleasant had occurred after someone had arrived from that passageway.

The EMF meter showed nothing unusual, with no readings at all except near the radio station door, as one would expect with significant electrical equipment there.

We waited in that area for awhile, because the energy was quite weak but I wanted to try to identify the residual energy impressions. Frankly, I thought this was about as good as it was going to get, on this ghost hunt. If I’d had any idea that we’d encounter an actual ghost later, I wouldn’t have spent so much time and energy on this area of the Academy building.

A student saw us, and asked what we were doing. I replied that I was checking energy levels for ghosts. He informed us that his room was the most haunted on campus, just a few feet away from where we were standing.

Although the EMF meter showed only small readings in his suite of rooms, the wall at the far left upon entering his room, seemed to drip unpleasant energy. “Drip” is the word that impressed me at the time. “Ooze” came to mind, as well.

I informed the student that there were minor readings on the EMF meter, but that the room felt awful and I certainly wouldn’t sleep there. Ann also didn’t like that corner of the room. The others were still out in the hall, by the radio station.

James was experimenting with the pendulum, and by the window, he was getting steady and strong “No, no, no” responses from the pendulum, without asking any questions.

GHOST OF THE BLONDE STUDENT

Now that I had more of a sense of the residual energy–or perhaps it was just the timing–I suddenly “saw” a slender, blonde-haired girl, running in the direction we were walking (from the dorm room, towards the radio station), and into a wall where–in the internal/psychic vision–she ran through a doorway. It was dark past the doorway, so I didn’t know if it was a hall or a room, or the closet described in the ghost stories. 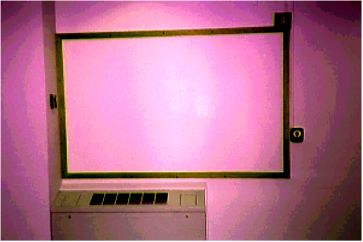 Above is a photo of the place where I “saw” the doorway that the girl ran through. The picture shows a bright white area on the board, near where I saw the door, but this is probably a reflection from my flash in the photo.

This series of images repeated itself about half a dozen times, each time becoming clearer. The girl was about five feet tall, maybe as tall as five foot three, but probably shorter. She was extremely slender. Someone asked me if she was anorexic, but I have the idea that she was merely a child, about 12-14 years old in appearance, and slender due to her youth, perhaps 80 pounds or so.

She had white-blonde hair, unusual in girls that mature, so she may have had Scandinavian or Germanic ancestry. Her hair was slightly stringy, and it reached halfway down her back. It was not thick hair, but not wispy either. It was straight, with a very slight wave towards the ends.

She was wearing a blouse, sometimes I saw it as pastel pink; at other times it seemed pale blue or lavender. The skirt or perhaps jumper, left the strongest impression. I saw it as a school uniform or Scottish plaid, with a brilliant electric blue and vivid red dominating. There was more blue in the plaid, than in most Scottish tartans. It was a very bold print.

Ordinarily I can use clothing to date a vision. However, due to her youth, a skirt–which I’d otherwise describe as late 1960’s–could have been from almost any era. She was outgrowing it, and it was at about knee length or slightly shorter. It looked too small for her.

I mostly saw her from the back, doing the teensy-step kind of run that children do, when they’re trying to sneak around. In one vision, she was out of breath and making a low, shrill noise as if she was terrified. In the others, there were no sounds and she didn’t seem certain that she was in danger. It was as if, sometimes as this energy is replayed, she thinks it could be a game.

GHOST OF THE EVIL MONK

I also “saw” a man in black clothing, with heavy shoes, striding angrily up the corridor that connected the two buildings. He had dark hair, notably darker than it should have been, for the age suggested by wrinkles on his forehead. Then again, he was angry, so perhaps that exaggerated the wrinkles. He had very thick eyebrows, but they weren’t curly. His complexion was fairly ruddy, but that may have been from anger and/or exertion.

I know that he didn’t care if anyone heard him. His footsteps were loud and heavy, and I also heard the swish-swish of cloth against cloth. This could indicate that he was carrying something made of cloth, that rubbed against his pants as he walked. Or he may have been in robes. Or he may have had very baggy pants, which flapped around his legs with each stride.

ENERGY LINGERS AT THE WALL

The visual energy imprint didn’t develop any further, so we took a few photos. Ann’s new camera refused to take photos of the wall where I “saw” the blonde girl. Ann stepped about four feet away, and pointed the camera in another direction, and it worked fine. Returning to photograph the wall, repeated attempts continued to fail.

I took a few photos with my two cameras. I took one photo with the camera that I’ve used at Gilson, that shows me spectral energy through the viewfinder. There was a bright light on the wall when I looked, at about the height a light fixture would be if there was a hall, room, or closet on the other side of what’s now just a wall. It was definitely artificial light, not sunlight or another energy form.

GHOSTS IN OTHER DORM ROOMS

In Bradford, we were approached by several other students who had experienced odd noises in their rooms. About half the rooms measured in the 2-2.8 range with my EMF meter. This is elevated energy, but nothing spectacular. Higher readings were readily explained by electrical equipment, such as televisions, computers, stereos, and so on.

Most of the dorm room stories involved knocking or slapping noises, working their way around the interior walls of the room. Classic poltergeist activity, and often frightening, but nothing to worry about.

In the next article: Bradford College – Academy floors three and four