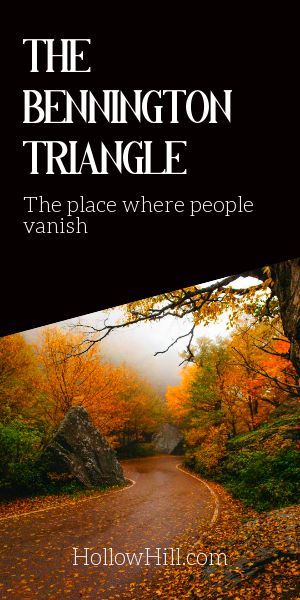 The Bennington Triangle may be America’s weirdest paranormal triangle.

(a) its location is huge and mostly over the water, and

(b) it has been so frequently researched, there’s a massive amount of information to sift through to find any patterns… or any credible, overlooked theories.

The Bridgewater Triangle (MA) offers some interesting quirks that haven’t been fully explored. But, that area is densely populated.

That’s both a plus (lots of eyewitnesses) and a minus (many locations are difficult to access or on private property).

By contrast, the Bennington Triangle (VT) has remained under the radar for many people.

Thank heavens for the Wayback Machine, so I could read this 1999 article: Vanishing Point, by Carl Hughes. If you’re interested in it, print it out; it could vanish from the Internet.

A strange celebration took place recently around Bennington in Vermont, north-eastern USA. The festival celebrates 50 years since anyone has vanished.

Bizarre, you may think, but not nearly as bizarre as what happened in this area between the years 1920 and 1950.

The actual date for celebration was October 28 that is when in 1950 a young hiker named Freida Langer became the last victim of what is known locally as the Bennington Triangle. Like dozens of others before her, Freida disappeared as completely as if the Starship Enterprise had beamed her up.

But then the article explains:

At least Freida did return eventually, albeit dead. In most other Bennington Triangle cases the victims were never found. They disappeared from their gardens, from their beds, from petrol stations, from log cabins. One man, James Tetford, even vanished while sitting on a bus.

Those stories are very weird.

I stumbled onto those stories when I researched facts behind the movie, The Haunting, and – in 2018 – the Netflix “Hill House” series. (Yes, there is a connection between the Bennington, and the Hill House stories.)

And then I heard about a couple who – if they weren’t doing drugs – encountered something extraordinary. To me, it sounds like an alternate reality, “hiding in plain sight.”

The challenge is knowing where to look, and what to avoid.

Until we know more, Bennington is probably a great location for hiking or to enjoy Vermont’s fall foliage.