Continued from
The true story of the Bell Witch 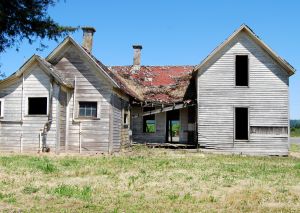 The Bell Witch was real. By the end of 1817, it had been witnessed by most of the Bell family and at least one outsider.

The Bell Witch became a sensation. Neighbors–and even strangers–travelled great distances to visit the Bells, hoping to see evidence of their ghost… or demon.

Even Andrew Jackson–soldier and future President–tried the spend the night at the Bell home, and fled in terror.

This was one of the worst things that could happen to a church-going family in the early 19th century. Now, the Bell family was known far and wide for their possible associations with the Devil.

A court case, and excommunication

In the midst of this unwanted attention, John Bell was accused of usury. Kate Batts and her invalid husband, Benjamin, said that Mr. Bell overcharged when he sold slaves to them.

The church acquitted Mr. Bell, but the local magistrate found him guilty in criminal court.  This was what the community needed. Immediately, the church reversed their earlier decision.

The Bell Witch, who now called herself “Kate,” began bothering the Bells’ neighbors. Her voice was heard within their walls, at church, and even in the streets.

The Witch revealed the private thoughts of anyone and everyone, and usually at the most embarrassing moments.

Some speculated that the Witch was actually “Kate Batts’ witch,” sent to get even with John Bell for his now-infamous business mistake.  But, that’s not the only reason why Kate Batt wanted revenge on the Bell family.

In fact, Kate considered herself engaged to John Bell. She purchased her trousseau, and boasted that she was marrying the heir to one of the South’s wealthiest families.

No one knows if there was really an agreement between John Bell and Kate Batts. However, he abruptly married Lucy Williams instead of Kate.  Miss Batts never recovered from the embarrassment.

More than one Bell Witch?

At least four other spirits acted on behalf of “Kate.” Their names included “Blackdog” and “Jerusalem.”

Some of these spirits seemed very Christian. They quoted Scriptures and sang hymns. One even helped John Bell’s wife, Lucy, with her household chores.

“Kate” remained the most active among the spirits… and the most vocal.

The Bell Witch regularly interfered with the Bell family’s lives.  For example, when Betsy Bell became engaged to Joshua Gardner, the Bell Witch objected loudly and often. After repeated attacks by the Witch, Betsy broke off the engagement.

Soon after Betsy ended her engagement to Mr. Gardner, John Bell had a relapse. His tongue and jaw problems returned. His doctor prescribed medicine, but it only helped for awhile. The Bell Witch proclaimed that she was killing Mr. Bell. On December 20, 1820, she succeeded.

At John Bell’s burial, the Bell Witch was heard cackling at her evil deeds. As John Bell’s family and neighbors stood in the cemetery watching as his body was lowered into the ground, they were surrounded by eerie winds and laughter by the Bell Witch.

After the funeral, the Bell Witch remained in the area for a few weeks. Then she left, and promised to return in seven years.

Did she make the Bell family rich?

She appeared as she’d promised. She spoke to John Bell, Jr. with his friend, Frank Miles. The Witch told the men about the upcoming Civil War, and about World Wars I and II. She predicted many things which later came true.

Did the Bell Witch help these men to succeed financially? Many people believe so. John Bell r. seemed to have an uncanny business sense after this, and became wealthy almost overnight.

According to some stories, John Bell Jr. left a document in his safe. It was to be opened after he died. If it was ever found, the family did not say what the paper revealed.

According to both Bell and Miles, the Witch left and promised to return again in 107 years (1935).

In 1886, the following story was published in The Goodspeed History of Tennessee.

A remarkable occurrence, which attracted widespread interest, was connected with the family of John Bell, who settled near what is now Adams Station about 1804.

So great was the excitement that people came from hundreds of miles around to witness the manifestations of what was popularly known as the “Bell Witch.”

This witch was supposed to be some spiritual being having the voice and attributes of a woman. It was invisible to the eye, yet it would hold conversation and even shake hands with certain individuals.

The freaks it performed were wonderful and seemingly designed to annoy the family. It would take the sugar from the bowls, spill the milk, take the quilts from the beds, slap and pinch the children, and then laugh at the discomfiture of its victims.

At first it was supposed to be a good spirit, but its subsequent acts, together with the curses with which it supplemented its remarks, proved the contrary.

A volume might be written concerning the performance of this wonderful being, as they are now described by contemporaries and their descendants. That all this actually occurred will not be disputed, nor will a rational explanation be attempted. It is merely introduced as an example of superstition, strong in the minds of all but a few in those times, and yet not wholly extinct.

The return of the Witch

According to legend–and as she predicted–the Witch returned to “her” cave around 1935. This cave was on the original Bell plantation. It’s the same cave where the Bell children had played, and sometimes encountered her in the early 19th century.

In 1935, she appeared to several soldiers who were camping in the cave for the night.
According to one story, the skeptic in the group eventually died from the injuries caused by the Bell Witch. Those who survived her attack were never the same afterwards.

Next, read the rest of the story, Bell Witch – An American Haunting to find out what happened to the Bell family.