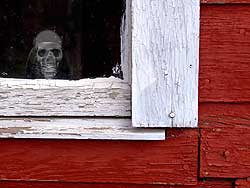 The Bell Witch was first seen in 1817. After tormenting an entire town and killing John Bell, she vanished for years.

Today, she haunts a cave near the Bell family farm. She is one of America’s most frightening ghosts.

President Andrew Jackson, who spent a sleepless night at the haunted Bell home, said, “I’d rather fight the entire British Army than to deal with the Bell Witch.”

The Bell Witch is one of the most colorful ghosts in history. Late in 1820, three years after the Bell Witch first appeared to John Bell, she murdered him.

Then she disappeared… for awhile.

In 1935, after over a hundred years’ silence, she returned to “her” cave on the Bell property, as promised. People say she’s still there. Their frightening photos and videos prove it.

The Bell Witch – How it all began

The Mississippians were the last Native nation to live in that area. They buried their dead in stone boxes. They placed the boxes in caves such as the one where the Bell Witch is reported today.

The Bell Witch might protect sacred Native American graves. But, those stone boxes aren’t her only eerie connection to Native lore.

She appeared to Drewry Bell and his father, John, when they were out hunting one day in 1817. At first, they thought that it was a huge turkey, and they shot at it. It started to fly away, and then it seemed to vanish into thin air.

Later, John and Drewry told friends and family that it had looked “like a human.” But, it didn’t have a face like a human. In fact, it was terrifying.

(This echoes the tales of Pennsylvania’s frightening “Snallygaster” and may relate to Native American “Thunderbird” legends.)

Soon after the hunting incident, the Bells and their neighbors saw many other strange creatures at the Bell’s farm by the Red River in Tennessee.

One had head of a rabbit but the body of a dog. At least one person tried to shoot it, but–like the “turkey” they’d shot at earlier–it vanished.

Another time, in the orchard near their house, Drewry and his younger sister Betsy saw an old woman walking slowly. Since the town was small, they were puzzled by this unfamiliar visitor.

When Betsy started to speak to the old woman, she disappeared.  Then, the situation became worse at the Bell homestead.

The “Witch” attacks the Bell family

Each night, the family heard scratching and chewing noises outside their home, as if a large animal was trying to get inside. Next, the family heard odd whispering. Finally the Bell Witch began making sounds inside the home, like loud swallowing.

She pulled the covers off beds when the children were sleeping. She physically tormented Betsy Bell, leaving ugly, red, stinging handprints where she’d slapped the child.

Around this same time, John Bell began having difficulty swallowing. Something seemed to be wrong with his jaw and his tongue.  He recovered from these symptoms, but he became sicker and sicker with new and different symptoms. The Bell Witch seemed to be wearing him down.

To make sense of what happened next, it is important to understand early 19th century society.

After the American Revolution, people wanted to live quiet, normal lives again. They preferred to blend in with their neighbors. If someone was called “exceptional,” that meant different, and that was frowned upon.

John Bell was an Elder at the Red River Baptist Church, to which his family and neighbors belonged.

However, in 1817, religion was changing dramatically. Traveling revivals became popular, driven by a new movement called Evangelicanism. It had spread like wildfire from its American roots in Mississippi.

New churches, such as the Baptists and Methodists, challenged established faiths to prove their worthiness in the eyes of the Lord.  Many churches–and religions–began to compete with each other for members.

At John Bell’s church, some members–including the minister’s son–were asking questions about God’s grace, predestination, and whether Salvation was ever assured.

Many older church members felt that these questions were the work of Satan. They began watching their neighbors suspiciously.

At about the same time the church was trying to squelch controversy, the Bell Witch increased her attacks on John Bell and his family in their home.

Not wanting to attract attention, Mr. Bell quietly asked his closest friend, John Johnston, to spend the night at the Bell home. Mr. Bell hoped his friend would have an answer to the Bell Witch problem.

Instead of helping, Mr. Johnston’s presence made things worse. For the first time, the Bell Witch spoke, mimicking the voice of Mr. Johnston.

Soon, people were talking about the Bell family and the odd events at their home.

In the next article – The Bell Witch reveals the neighbors’ darkest secrets, and murders John Bell and perhaps others: Bell Witch – the murders