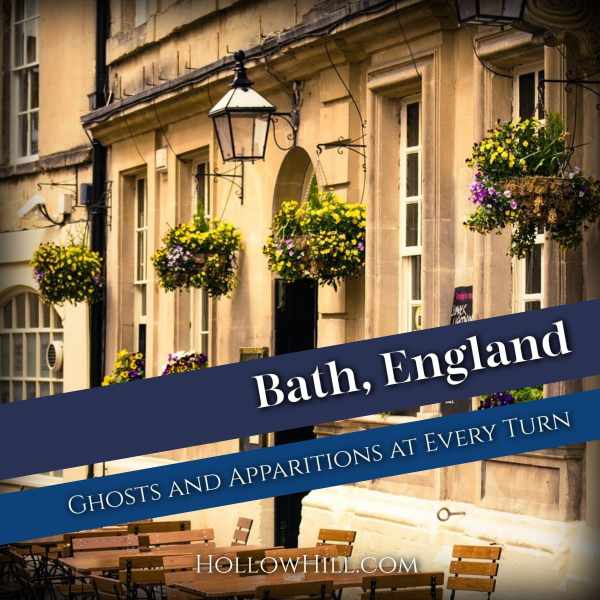 If you’re looking for a city with more reliable ghosts and apparitions than most, Bath, England may be ideal.

In fact, the biggest challenge may be how real Bath’s ghosts seem. Many look exactly like everyday, living people… in costumes.

Bath is one of the loveliest cities in the United Kingdom. It features winding streets, superb museums, fabulous shopping, and a history including Roman ruins.

If you’re a tourist and a fan of ‘Pride and Prejudice,’ you’ll enjoy the famous Regency-era Pump Room as well as the Jane Austen Centre.

However, Bath’s colorful history is documented by more than museums and plaques.

Its ghosts tell Bath’s story, too.

Around the city of Bath, ghostly figures and apparitions so commonplace, locals often take them for granted.

That’s why, especially for ghost hunters, Bath is a perfect destination for an extended holiday or vacation.

Here are a few of Bath’s most famous ghosts:

The Man in the Black Hat

Easily Bath’s most famous and most-seen ghost, the man in the black hat is dressed in late 18th-century attire and sometimes wears a billowing black cloak. He’s regularly seen around the Assembly Rooms.

For the best results, look for him at Saville Row and Bennett Street. [ map ]

Note: That isn’t the infamous “Hat Man” of popular folklore.

Several ghosts have appeared in the vicinity of Freezing Hill, just outside Bath. Most of these phantoms are from the 17th century, when this hill was the site of the bloody Battle of Lansdown.

The best opportunity to see these ghosts is from The Park, a 240 acre estate featuring a Jacobean mansion that is now an hotel. You can also enjoy a fine meal at The Oakwood Restaurant, and play golf at their Crown and Cromwell courses. [ map ]

It’s not a movie that’s being filmed at the Royal Crescent when you see an elegant coach drawn by four horses.

Instead, you’re witnessing a residual haunting, repeating the elopement of Elizabeth Linley of No. 11, with Irish playwright and politician Richard Brinsley Sheridan.

Sheridan was not Miss Linley’s only suitor. Captain Thomas Mathews (a married man) and Lord Sheridan fought two duels – with swords – over the lovely Miss Linley.

Sheridan may have won her hand in marriage, but he later proved unfaithful.

Elizabeth contracted tuberculosis and died at age 38. A bronze plaque at number 11 Royal Crescent marks the address from which she eloped. 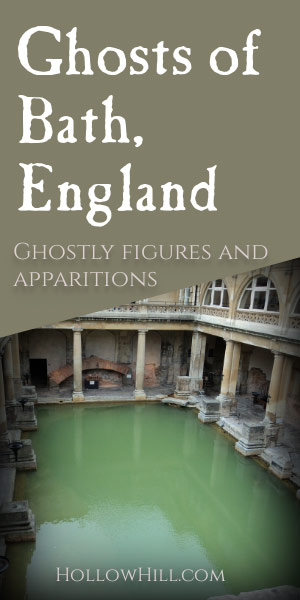 These sites are next door to each other at St. John’s Place and Saw Close [ map ]  Their ghost stories seem to be interwoven, and the ghosts congenially wander from one building to the other.

At least two ghosts appear in this area, and the site also reports what may be a cryptid.

The Garrick’s Head pub offers both smoking and non-smoking sections, and is less than a half mile from Bath Spa rail station. (It’s also near Popjoy’s Restaurant, listed below.)

Many visit this former home of Richard “Beau” Nash for the fine food. However, the restaurant hosts at least two ghosts, both of them women.

One is Juliana Popjoy, the 18th-century mistress of Beau Nash.

The other ghost is Janice (or perhaps Janet). She is more modern, dressed in attire best suited to the 1960’s. She dines alone and looks perfectly normal until she vanishes.

You’ll find this quirky haunt at 3 Belvedere – Lansdowne Road, at the corner of Julian Road

‘Bunty’, a serving girl from the Victorian Era or slightly earlier, appears in the kitchen of The Beehive, a popular Bath public house.

A hooded figure – perhaps a monk – appears at this tavern when he is concerned that the structure may change, such as during repairs or redecorating.

He appears briefly and is fairly transparent. Except that his appearances coincide with events in our time-space, I’d wonder if he was a time-slip.

This jilted bride has been seen strolling around the Square in her white gown. The white wedding gown would mean she probably lived (and died) in the Victorian Era.