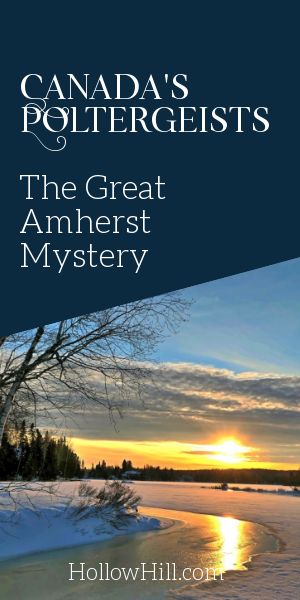 The Great Amherst Mystery has puzzled ghost hunters and paranormal investigators for over a century.  It’s the true story of one of the world’s best-documented poltergeists.

Before the ghostly manifestations began, Miss Cox had been the victim of an attempted rape in a secluded part of Amherst. Her attacker, Bob MacNeal, was a shoemaker with a terrible reputation that Miss Cox had not known about. She escaped the attack with minor injuries. The “mysteries” started soon after this event.

The hauntings began with small poltergeist phenomena: little fires, voices, and rapping noise. It soon escalated to include times when Miss Cox would seem to inflate like a balloon, even to her extremities, and then abruptly return to normal size. These events were witnessed by a large number of people.

The hauntings followed Miss Cox outside the house. Once, the knocking and rapping noises interrupted a Baptist Church service that Miss Cox attended. Although she sat towards the back of the church, it sounded as though someone was hammering on the front pew, making it impossible to hear the service. Miss Cox left the church in humiliation, and the noises stopped immediately.

Desperate to find the source of the problem, Miss Cox tried automatic writing and consulted spiritualists. The primary ghost claimed, in automatic writing, to be Miss Maggie Fisher. Miss Fisher had attended the same school as Miss Cox, but had died around 1867, before graduating. Miss Cox had not known Miss Fisher, but was aware that they’d been in school together.

Other ghosts came forward during this time, announcing themselves as: Bob Nickle, age 60, also a shoemaker like Bob MacNeal who’d attacked Miss Cox. Another was Mary Fisher, sister of Maggie Fisher. Other ghosts included Peter Teed, John Nickle, and Eliza MacNeal. The number of ghosts and “coincidences” among names and professions reduces the credibility of this part of the story.

Further, Bob MacNeal, Miss Cox’s attacker, later claimed that he’d been haunted for years by the same Bob Nickle. The accounts sound as though Mr. MacNeal was trying to shift the blame for his violent acts, to the ghost.

Nevertheless, Miss Cox continued to be plagued with hauntings wherever she went.

When Life Gives You Lemons…

Hoping to turn her misfortunes to her advantage, Miss Cox went on tour in June 1879, hoping to draw audiences to hear her story and make a living from the income. She was assisted in this by actor Walter Hubbell, who’d visited Amherst specifically to witness the now-famous ghostly manifestations.

However, the crowds were skeptical and easily angered. One evening in a theatre, a rival theatre-owner leaped to his feet and began heckling Miss Cox and Mr. Hubbell. The crowd joined in, and soon a riot broke out. This was Miss Cox’s last time on stage, as her touring efforts were a clear failure.

The series of manifestations continued until one dramatic event changed everything.

Miss Cox went to work for Arthur Davison of Amherst. Mr. Davison was a skeptic, although he admitted to witnessing numerous poltergeist events at his home when Miss Cox was there. The worst was when the ghost(s) set fire to his barn and it burned to the ground.

Mr. Davison accused Miss Cox of arson, and she was convicted of the crime by an ambivalent court. Her sentence was four months in prison, but public support for the unfortunate woman led to her release after only one month.

It was as if the spell had been broken.

After that, Miss Cox was troubled by minor poltergeist events, but nothing significant.

After her death, Walter Hubbell published a “The Great Amherst Mystery: A True Narrative of the Supernatural

” and included a 1908 affadavit that was signed by 16 Amherst witnesses to the hauntings.

This article originally appeared in 2001 at Suite 101 as The Great Amherst Mystery, written by Fiona Broome.