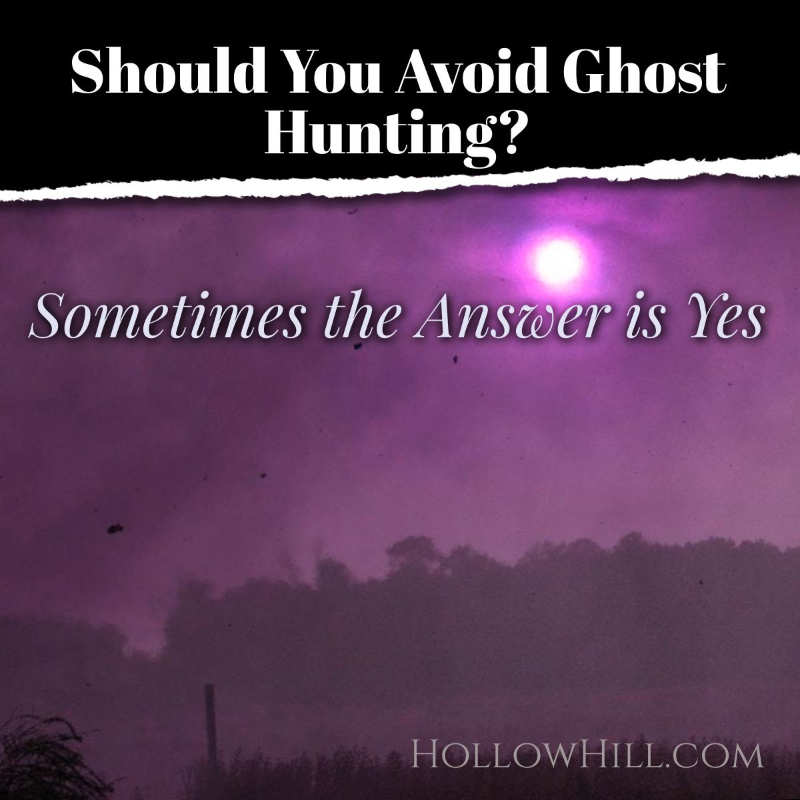 When should you avoid ghost hunting? Why – at certain times – could your safety (and sanity) be at risk?

At almost every large ghost hunting event, I’ve seen someone put themselves in harm’s way.

They’ve suffered a tragic loss. Someone they cared deeply about is gone.

The person decides that, through ghost hunting, they might reconnect with the deceased.

I have never seen a positive outcome to that… not the kind that involves certain contact with the other (deceased) person, or full closure to their grief.

Worse, it puts the grieving person at risk. They may be so eager to communicate with the lost loved one, he becomes vulnerable to dark or malicious entities.

(Yes, some dangerous and demonic entities seem to masquerade as lost friends and family.)

Or, the person may be victimized by charlatans masquerading as ghost hunting professionals.

Online or in person, sleazy people can steal the grieving person’s money, or even their identity.

At the other extreme, when someone is involved in paranormal research with a single, self-serving goal, it’s easy for them to distract their team members.

For example, the person may wander off by himself, thinking he saw something that reminded him of the person who died.

Then, the investigation has to be halted while everyone searches for the missing team member.  In many cases, that adds up to a frustrating, wasted research session.

(This is why I recommend a careful interview before accepting anyone new on a critical investigation. Be sure you know the person’s motivation for ghost research.)

Finally, ghost hunting may prevent the person from completing the grieving process. They won’t let go of the past. They’re still trying to hold onto the person who’s gone.

Really, at almost every ghost hunting event, by late in the evening, I’ve found someone sobbing in a corner, absolutely distraught.

In every case, the person was still mourning a lost loved one. And, during that event, the person realized that ghost hunting wasn’t going to bring back their loved one.

My advice is: Cherish the memories. Allow yourself to grieve. Give yourself as much time as you need.  (I’ve always admired the Jewish tradition of “sitting shiva.” I think many of those traditions could help people of other faiths – including Atheists – as well.)

Seek professional counseling if you need it. Don’t feel embarrassed to reach out to those who can help.

After that, if you’re still interested in ghost hunting – out of curiosity, or a spiritual or scientific interest – get involved.

Meanwhile, you put yourself at risk if you leap into ghost hunting with the goal of reconnecting with a lost loved one.

There are many great reasons to become a paranormal investigator and pursue ghost hunting. Be honest with yourself – and your team mates – about why you’re there.

We need more bright, interested ghost researchers. I hope you are (or will be) one of them… but only when the time is right for you. 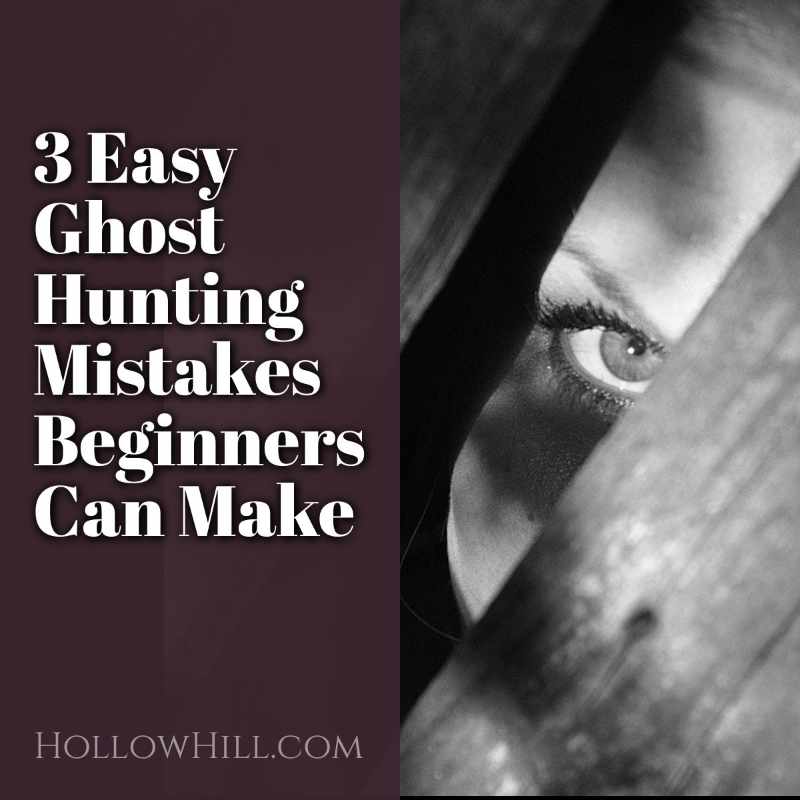 From the start, lower your expectations, but also pay attention to everything. One of the biggest blunders any ghost hunter (new or experienced) can make, is to brush off something “odd” with what seems like a reasonable explanation.

Fact-check everything at the site.

For example, did the door really slam because of a breeze… or might that be a ghost? (Hold up a lit candle or a piece of tissue paper to detect a breeze.)

Was that voice a team member in a nearby room, or a disembodied spirit? (Call out to your team members to see if anyone was close enough, and talking when you heard whatever-it-was.)

The rules can be different at haunted places. Once you get used to that, ghost hunting can be even more thrilling than you expect.

1) Ghost hunting can be more – and less – scary than you expect.

On most ghost hunting TV shows, something weird happens every 15 minutes or so.

In real life, if we hope for at least one ghostly anomaly during a two- or three-hour investigation.

Be patient. Try waiting 20 minutes before formally starting your investigation.

That’s when the eerie moments can happen… but you may still have to wait an hour or more for anything dramatic.

2) Expect some drama, but not the kind you’ve seen on TV

Sometimes, dramatic things do happen during a ghost investigation.

During most paranormal investigations, the subtle things are the ones that seem the most disturbing… and sometimes very personal.

For me, the eeriest was hearing my late mother’s voice – her distinct tone, accent, and phrasing – say a single line through a “Frank’s Box.”

The person with the Frank’s Box was on a balcony about 20 feet away from me. He had no way of knowing that my mother had died about three weeks before that.

If I hadn’t been listening closely, I would have missed what she said, even though it was directed at me, personally.

The rest of the investigation was merely average. A few odd noises. A few orb photos. Something that might have been EVP, or it might not.

But for me, that one, strange moment made it a successful investigation.

I’m glad someone else was using a Frank’s Box. I’m also glad I wasn’t focused on any ghost hunting tools. All I was doing was listening and observing, and that’s why I heard that faint, distant message.

Since Mum didn’t use my name, the researcher wouldn’t have known the voice was speaking to me.

What I Learned from That

That weird, fleeting moment is why I insist that people use their five (or six) senses, primarily, and rely less on ghost hunting equipment.

Yes, it could be argued that the voice came through a Frank’s Box.

Without that device, in that quiet setting, perhaps my mother would have found some other way to communicate with me, if she needed to.

For me, the key element was: I was listening to every sound.

So, one of the biggest ghost hunting mistakes can be: not pausing and paying close attention to everything around you.

3) Always start with a plan

Some ghost researchers prefer not to know anything about the site – and its ghosts – ahead of time.

With no data or expectations, the power of suggestion cannot be a factor.

That’s fine. I understand that logic, but it’s not for everyone.

I prefer to research everything about the site, its ghosts, and their history. That way, I know exactly where I’ll get the best results.

Also, I’ll have a list of possible triggers to use, to prompt paranormal activity.

No matter which approach you choose, it’s always good to have some kind of plan. Here are some suggestions.

Make the most of your ghost hunting at Halloween. Between weather, crowds, revelers, and police patrols, it’s best to plan ahead to avoid Halloween disappoin…

Whether it was a good experience or a bad one, too many beginners decide that their one ghost hunt was “all it is.”

Please, go on a second (and third) ghost hunt.

At least return to the first site to debunk what you encounter (or confirm that the place really is haunted).

Watching ghost hunting on TV – and hearing others talk about their investigations – your expectations may be skewed.

From my experience at ghost hunting events, here’s what I see among many first-time ghost hunters:

We need more serious researchers so we can learn what’s really going on.