Are you looking for a haunted house? Local ghost stories can be a fine starting point.

The problem is, any ghost story could be the real thing… or just an urban legend.

If you’re looking for a truly haunted house, you can probably find one… if you know what to look for.

Here are 13 clues that expert ghost hunters use to find haunted houses.

In most cases, look for three or four of these features at one location.  That’s as close to a “sure thing” as you may find, if no one else has investigated the house.

But, even one of these signs could be enough, if it’s extreme or weird enough.

1. A house with a history of drama, violence, and conflicts.

If the owners were very wealthy or – at the other extreme – subject to dire, life-threatening poverty, that’s enough to suspect drama.

If you visit the local library or historical society, ask about prominent citizens who were “colorful characters.” That can be a good starting point.

Ask if any part of town was “the wrong side of the tracks” in, say, the 19th century. Study its history for tragic tales that could result in hauntings. Also find out who the landlords were; their homes may be haunted, as well.

When a house is haunted, even casual research can turn up a sinister history. (The local cemetery may hold clues, too. Look for odd inscriptions and unusual monuments.)

2. It’s been sold (or rented) often, and the price seems too low.

Use real estate sites like Zillow.com to see how recently the house was on the market, for how much (compared to nearby houses), and how frequently it’s been on the market.

Look at past years’ records, too. See if there’s a pattern of unusually low prices, frequent sales, or other anomalies.

If everything looks normal, take note of “too low” prices or “too frequent” sales of nearby homes. The story you heard might be about a nearby home, and the report got the address wrong.

Of course, if it’s been empty for a long time, that’s a big red flag. But first, be sure to get permission to investigate it. It might be private property.

If you suspect that a house is haunted, ask the owners or tenants. Especially if they’ve just moved in, they may be delighted to share what they’ve heard about their ghosts. (For them, this may still seem like fun.)

Or, they may react with hostility if too many ghost hunters have contacted them, or if friends & family have voiced concerns about the house.

Several times, I’ve investigated homes where the wife confided that her husband hadn’t been sleeping right since they moved into their new home. Or, the husband reported that his wife “wasn’t herself,” lately.

Of course, just the act of moving into a new home can be stressful. Respect people’s privacy.

Always listen to your “gut feeling.” If it tells you something isn’t right, leave your name & contact info with the current residents.

Tell them to contact you if anything seems amiss in their new home. Be sure they know you don’t charge anything to investigate, and they can trust you to keep their concerns in confidence.

Then, leave them alone. There are plenty of other unexplored haunted houses.

In folklore, it’s an evil omen when a house already “buried” between tall hills or cliffs. At the very least, it can give a sinister impression.

From my experience, many haunted houses are at extreme ends of the happy-to-ominous spectrum.

Maybe the location seems too sunny and cheerful.

That’s how I felt when I first arrived to investigate The Myrtles Plantation. The staff, the gift shop, the cute white picket fence… everything suggested it was a happy, not-haunted place. (After around 10 PM, everything changed, big time.)

Or, you take one look at the area and say, “Wow, what a great, dismal place for a haunted house!”

Oil City, Pennsylvania comes to mind immediately. I’d love to go back there and explore its older homes. Don’t let the cheerful photos fool you. I spent just one sleepless night in Oil City, but that was enough. I’m convinced it’s one of America’s most-overlooked haunted communities.

This may seem the opposite of the folklore, above. In this case, it’s about history and burial traditions.

In some cultures, including several Native American societies, the ideal place for a burial is as close to the sky (heaven) as you can find.

Also, powerful communities and land owners chose home (and fort) locations where they could look down on approaching enemies.

This kind of history is prime for power struggles that led to hauntings.

(New York’s Morris-Jumel Mansion is a typical “peak” mansion, overlooking the Harlem River. It’s Manhattan’s oldest house and it has a haunted history.)

One of the surest signs of a haunting is when electrical devices fail or batteries drain for no apparent reason.

During an investigation, if you find AA batteries in random places, those were probably left behind by previous investigators. It’s a good sign that the site is haunted.

(If you find others’ abandoned batteries, pick them up and dispose of them responsibly. Ghost hunters earn a bad reputation when they leave litter behind.)

Here’s what to do if, during an investigation, your ghost hunting equipment fails because the batteries go flat.

7. Lights or figures appear when no one is there.

Yes, this can be a made-up story. It’s a common urban legend.

But, if the homeowner (or a neighbor) insists that figures are seen in the windows when no one is home, that’s enough reason to investigate.

(The police can be tremendously helpful. This is a very good reason to become friends with local police officers. They know which houses are reported with unexplained lights, inside, but – when the police get there – they never find evidence. Shepherdstown is among the most famous.)

8. The curtains are always closed.

Closed curtains can indicate a home where people are frightened. But, it might be a sign of someone with an offbeat sleep schedule. Ask about this.

Frightened people hope their uneasiness comes from outside the home. So, they close the blinds, shades, and curtains to shut out the danger.

It may be an unconscious reaction.

They may have an excuse, but it’ll sound hollow. They’ll say things like, “Oh, that’s to keep street noise out,” though the street is obviously a quiet one.

At most residential hauntings, when curtains are always closed, I know someone – or everyone – in the house may be unreasonably frightened.

9. Most of the original/previous residents’ belongings are still in it.

The Amityville Horror house is a good example of this. At least two families bought the house when it was still furnished by the previous tenants.

After the DeFeo murders, I suppose the furniture was simply left there. There wasn’t anyone to claim it.

But, when the Lutz family left everything behind as well, that was practically a flashing neon sign: Something was deeply wrong at that house.

It’s normal to find a small bookcase or broken chair in a basement. Small piles of dirt or discarded items are routine, as well.

However, when people abandon large items that are expensive to replace, either they’re moving a long distance or fleeing the house.

10. The house holds your attention (or repulses you).

More than any other sign, a place that seems odd (or even creepy) and you can’t explain why, is worth investigating.

(That’s how I stumbled upon Austin’s “Jack the Ripper” connection. Until I researched what they had in common, I couldn’t explain – even to myself – why I felt drawn to certain Austin locations, over & over again.)

Which sites keep catching your eye, or seem unusually interesting, for no apparent reason?

On my teams, when someone casually mentions a house or other site that seems “kind of weird,” we almost always find something odd there.

I’m not sure that, all by itself, that one factor is enough to say, “That’s haunted.” But, it greatly increases the likelihood of paranormal activity.

This is especially likely at older home sites, when family cemeteries were routinely placed near the house.

You may need to research the site using very old maps and property descriptions. (When a property was sold to a new owner, the land and features on it may have been detailed in the deed.)

You may hear that, in the 19th or 20th century, the graves were moved to a community cemetery.

What people are less likely to tell you: Even today, coffins, bodies, and even body parts are sometimes left behind. Without ground-penetrating radar and detailed records, it was easy to overlook graves.

If the graves were really old and the wooden (or cardboard) coffins rotted in the ground, finding all of them may have been impossible. (I’m reminded of the New Hampshire home where the owner insisted on carrying a shotgun when she went out to the backyard, after dusk.)

Also, unmarked graves are normal at any cemetery, large or small.

A forgotten grave could explain a haunting. Nobody wants to be forgotten. 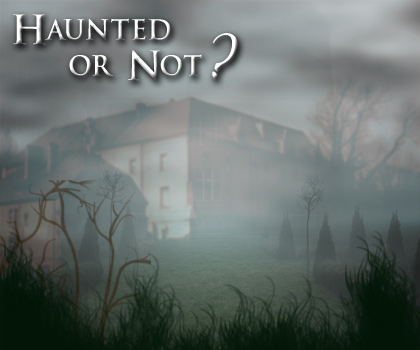 If you know that a house had a secret passageway, a hidden room, or something like a “priest hole,” investigate it.

If you’re not sure, measure the rooms. Then, compare them with the dimensions of the house. A digital (laser) measuring device can save time.

Does a wall shape not make sense?

A jag in a wall could indicate a chimney or where pipes are routed through the house. That’s not paranormal.

But, if it’s large enough, you may have stumbled onto a hidden room or boarded-up closet.

The question is: Why was it concealed?

I’m reminded of a haunted hotel room at Austin’s Driksill Hotel. I was there when they opened it, after decades of keeping it sealed. It had an eerie vibe, and not just because of the vintage furnishings boarded-up inside it.

So, look for hidden rooms or legends about them.

If you find one, that site probably has a credible ghost story.

For example, Tavern 27 (Laconia, NH) has several great ghost stories.  When I investigated it, the owners still hadn’t found the legendary hidden passage from the attic to the basement.

13. It was part of the Underground Railroad.

In the United States, starting in the 1700s, the Underground Railroad was a network of “safe houses” for runaway slaves. A similar 17th century escape route led from the American colonies to Spanish territories.

When I investigated a rabidly haunted house in Laconia, New Hampshire (USA), one of the first things the owners showed me was their kitchen. Beneath their refrigerator, they’d found a hidden cellar, once used by the Underground Railroad.

Also, some of those rooms – once hidden – were later converted to root cellars or other storage areas. If the cellar seems odd or divided, ask if the homeowners know its history.

When a home was used as an Underground Railroad site, intense fear – both the slaves’ and the homeowners’ – could explain a residual energy haunting.

(If you investigate an old cellar or hidden room, be sure to take precautions in case the air isn’t safe.)

Many other features suggest a house that may be haunted. These are the top 13 that came to mind, when I wrote this article.

If you can suggest other “red flags” that indicate a haunted house, I hope you’ll leave a comment about it.

3 thoughts on “13 Ways to Find a Haunted House”