Now is the best time to explore ghost hunting. It’s an opportunity to encounter paranormal activity on a personal level.

Here’s why, and how to make the most of your ghost adventures.

Ghost hunting – “hunting” for evidence of ghosts and spirits – has been popular in waves, starting in the 19th century… and perhaps earlier.

If you’re new to ghost hunting, start your investigations at sites with confirmed hauntings.

Chances are, you’ll find plenty of them, and you’ll have a richer, more chilling experience.

In the 20th and early 21st centuries, we’d stumble around each site, hoping to witness ghostly anomalies.

At best, it was a coin flip.

Today, a quick Internet search may turn up investigators’ reports and YouTube videos.

You may learn exactly where and when to expect certain phenomena.

Today, we have better EVP recorders, better devices triggered by EMF spikes, better digital thermometers, as well as tools to rule out normal (but odd) phenomena.

But, to confirm an uneasy feeling or the raised hair on the back of your neck, today’s tools are superb.

What I use: It’s not impressive to look at, but I still use the Ghost Meter Pro. It may have been an “as seen on TV” product, but – from my experience – it really does work.)

I also use dowsing rods, but only to double-check my “gut feeling,” or narrow my research focus to a smaller area. (However, individuals’ tests are showing that some people can control dowsing rods with their minds. Does that matter? Maybe.)

My main camera is an old-school Nikon Coolpix, because it uses standard AA batteries. In a dramatically haunted location that may drain batteries quickly, it’s easy to reload the camera with batteries from my backpack. Or, someone can dash to the nearest convenience store to buy replacements.

For nearly a decade, too many restaurants, hotels, and businesses tried to claim a resident ghost.

Some really were (and still are) haunted, but only on certain days, or in response to specific triggers.

Today, a ghost at your hotel, restaurant, or business doesn’t guaranteed commercial success. So, many (not all) claims are more trustworthy.

When you hear about a haunted site offering paid ghost tours and vigils, it’s usually haunted.

But, double-check reviews, and ask friends who’ve been there, anyway.

(Note: at the Myrtles, be sure to stay in the main building or its annex, not a wholly separate building. The closer you are to the haunted mirror in the main entrance, the better. And don’t expect much until around 10 PM. Then it can get wild.)

Now that ghost hunting isn’t as trendy as it was a few years ago, you’ll have more time (and usually more elbow room) to explore haunted sites when they’re open for investigations.

Between 2010 and early 2017, I stopped investigating most well-known haunted sites. Photos were impossible when crowds were in the way. And EVP was out of the question when lots of people were talking nearby.

Worse, it was nearly impossible to focusing on what I was sensing, internally.

And then there were the distractions of others’ flash cameras, phone ringtones left on, and the myriad beeps and loud clicks of some EMF detectors.

Today, I’m far more comfortable scheduling visits to haunted locations… unless it’s Halloween or a Friday the 13th, of course.

Starting around 2004, ghost hunting events became popular. Some were held in locations with history… but no ghosts.

Even at haunted sites, non-haunted areas were usually part of the event, wasting investigators’ time.

If you’re attending an event, check the credibility of any celebrities participating at the site. 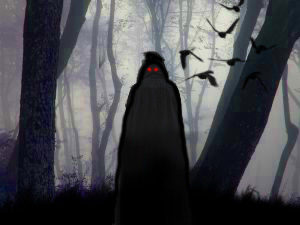 Some people are so eager to believe in ghosts, they jump at shadows. They claim that something was surely a ghost, when it was merely startling or odd.

I’m wary when I hear reports of ghostly tropes, like “the hooded monk with the red eyes.”

When looking for places to investigate, those kinds of recommendations aren’t helpful.

Worse, it’s a challenge to research at any event where “Dude, run!” moments distract you.

You can’t trust every “ghost story,” but – thanks to a declining number of thrill-seekers – recommendations are more reliable now.

For a while, haunted sites were able to charge far higher prices during the recent ghost hunting trend.

Regularly, I heard about $150 (and more) for two- or three-hour tours, with no value added. (No food, no private rooms, and no genuine historians or professional ghost hunters on hand.)

Now, pricing is one extreme or the other.

Either the tour (or vigil) has lowered its prices to attract more visitors, or they have to charge very high fees to maintain the site.

For me, that’s a coin-flip.

So, you can find some great ghost hunting experiences at lower prices than, say, five years ago. But, be sure to research the location ahead of time, to confirm its ghosts.

Do you believe that past dramatic events leave ghostly residual energy at a location? I do.

But, this means that recent drama – including ghost hunters who encounter scary things (even if they’re jumping at shadows) – also leave an energy imprint.

A noted example: Researcher John Sabol recorded EVP that was an imprint of a Ghost Hunters’ investigation (perhaps a “time echo” or time-slip)

Usually, recent energy is light or shallow. It wears off quickly.

Deeply troubling drama in the past seems to leave a far more indelible energy imprint.

And, according to some researchers, those imprints can be re-energized by modern-day triggers.

So, I’m pleased to see smaller crowds and fewer investigations at haunted sites.

In the coming years, we’ll have less distracting, recent energy imprints at the most popular haunts.

Some sites may be genuinely haunted, but – during the recent wave of ghost hunting popularity – they (deliberately?) neglected to fix issues that only seemed like evidence of ghosts. 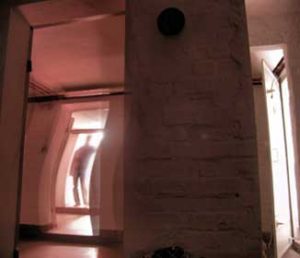 He rushed to show me his readings, and I confirmed them.

Of course, that was disappointing.

Though I’m sure Lizzie Borden’s house is haunted, I can’t overlook normal issues – like elevated EMF – that could merely make a place “feel” haunted.

When we reported this to the woman hosting our investigation, she seemed to shrug it off. At the time, people didn’t understand as much as we do now, about EMF at eerie locations.

Today, sites like that are better informed about those kinds of problems. Most of them make sure visitors’ experiences aren’t affected by normal (not paranormal) issues.

At any haunted location or event, you’ll meet new and experienced researchers. You can learn a lot from serious researchers, if you follow them around and – if it’s okay with them – ask questions.

Now that ghost hunting is less trendy, there’s a far better chance of meeting a serious researcher, and learning from him or her.

During the peak frenzy of ghost hunting, now and in the past, some businesses seized any excuse to outshine the competition.

Today’s ghost tours usually fall into one of two categories:

(I’m reminded of the stories of New Orleans’ LaLaurie Mansion. The top floor that tour guides used to point to, and talk about a slave girl falling to her death…? That floor didn’t even exist when the LaLaurie family lived there. Those tours mention it less, now that I’ve exposed the truth.)

If you’re looking for the latter, most can be identified by their advertising. Every tour is likely to indulge in a little hype, but the theatrical ones often highlight their “performances.”

If you want a genuine experience, look for a tour that stresses the area’s history. They’re easier to find than they were before, say, 2019.

Ghost hunting has followed the Diffusion of Innovations Curve to its conclusion.

In most cases, we’re back at the beginning of that curve. People still involved in ghost hunting are among the innovators and “early adopters.”

It’s a good opportunity for serious ghost hunters. I hope you’ll be part of the new wave of research and discoveries in this field.

And, in addition, it’s fun again.

If you’d like to learn to investigate ghosts, I offer a free Ghost Hunting for Beginners course, at Hallowfields (dot com).