1. Anyone can be a ghost hunter.

You can be a ghost hunter, no matter what your background or education. You’re welcomed in this field whether you you start as a believer, skeptic, amateur, professional, child, or adult.

2. We know more than we did in the past, but we’re still looking for answers.

Many of us became ghost hunters because we had questions. We asked things like:

Most of those answers will be personal. Our opinions may influence others, but – ultimately – each person will reach conclusions based on personal experience.

Thanks to tools developed by researchers like Bill Chappell, we’re able to say, “Yes, something odd and unexplained is going on, here.”

What we can’t prove (to others, anyway) is whether it’s a ghost, or even what a ghost is.

But, it’s important that we can document the weird EMF spikes, temperature anomalies, visual quirks, voice (EVP) recordings, and synchronous replies we receive when we investigate haunted places.

Even the most dedicated skeptical critic can’t explain all of that evidence with normal answers.

We have increased evidence of the paranormal. That’s a big improvement over ghost hunting as it was, as recently as 10 years ago.

Over the past dozen years, many people have admitted that their homes, hotels, and restaurants are haunted.

More abandoned hospitals and schools, and previously ignored battlefields have invited researchers to investigate. Some of those sites are terrifying.

Of course, a few locations aren’t as haunted as people once thought. Also, some “hauntings” have been exposed as hoaxes.

The result is: ghost hunters have far more reliable opportunities for important research.

4. Ghost hunting can be boring, but thrilling as well.

If I don’t prepare for an investigation, about 80% of my field research is likely to be boring. My team and I will spend hours standing around, waiting for something to happen.

This can happen for several nights. If we’re lucky, one startling and powerful moment will make all the waiting worthwhile.

So, if I’m invited to an investigation or vigil and don’t have time to prepare, I’ll join the group anyway.

Of course, many investigators prefer not to know anything about the site they’ll visit.

They’ll feel more confident if they encounter an apparition or cold spot, and later discover that many researchers had almost identical experiences, at the exact same location.

I prefer to find out as much as I can, ahead of time. In my opinion, understanding a site’s history – with insights about those who’ve lived and died there – gives me more rapport with any spirits or residual energy.

When I investigated the Myrtles Plantation, nothing happened for hours.

During that time, I checked out the bathroom where a ghostly child was heard weeping.

Then, I closely examined the bedroom — especially the bed — to see if any devices could jolt me awake around midnight or 3 AM. (Those were the most reported times, among people who’d spent the night there.)

I went downstairs, and studied the portraits as well as the “haunted mirror” in the front hall. I tapped a few piano keys to see what they sounded like.

This was partly to debunk existing “ghost stories” of the Myrtles, but also to become more comfortable in the setting.

After thoroughly exploring the site, I felt more of a connection with the house and any ghosts that might linger there.

So, as I waited for weird things to happen, I was not bored.

Others may not approach ghost hunting the way that I do. But, for me, my research – before the investigation and upon arriving at the site – makes the waiting less boring.

Either way, exciting discoveries are what make ghost hunting worthwhile. And yes, even after decades of research, I’m still startled at (and fascinated by) haunted places.

From hiking compasses to homemade dowsing rods, and from automatic writing to circles in charcoal (or chalk) to mark the place of an object (to see if it moves), old-school techniques work.

Is his own videos and on the Haunted Collector TV series, Brian Cano has introduced modern audiences to many of these techniques. He’s one of several people who specialize in that area.

What’s most important is this: You don’t need to invest a lot of money in ghost hunting equipment. In addition, old-school techniques can be far less distracting. When you can focus on all five (or six) senses to detect ghosts, you can have a very rich experience.

In many cases, especially “green lady” ghosts and others who protect family members, ghosts aren’t trapped here. They don’t need your help. They’re here to help others.

7. Some ghosts can’t be helped.

Many ghosts refuse to accept that they’ve died. They want to turn back time and have their “Heaven Can Wait” moment.

Others are so terrified of what awaits them on the other side, they won’t budge. 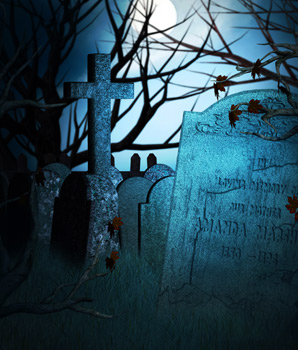 Some – especially 18th and early 19th century ghosts – are convinced that, as some gravestones say, they must wait “until Jesus returns.” That refers to Job 14:12, “So man lieth down, and riseth not: till the heavens be no more, they shall not awake, nor be raised out of their sleep.”

In most cases, you’ll find those ghosts at cemeteries, churchyards, and family plots.

If you feel called (as a ministry) to help those spirits, that’s a noble effort. But, in many ways, it’s an adjunct to ghost hunting. It’s something people do after they’re sure a spirit lingers at a particular location.

If your focus is helping spirits find peace and “cross over,” be sure your fellow ghost hunters share your interests. The process can be lengthy, requiring hours or even multiple visits.

Some haunted sites seem to have ghosts. Others may be troubled by residual energy.

Ghost animals are more prevalent than you may realize.

Also, if you study the history of haunted objects, you’ll find some interesting trends. For example, in the 19th & 20th centuries, haunted chairs were practically commonplace.

(I’m reminded of the haunted chair in the upstairs hallway at Wunsche Brothers’ Cafe in Old Town Spring, Texas.)

So, keep an open mind. You may discovered eerie, paranormal activity where you least expect it.

Some paranormal phenomena clearly indicate ghosts. Others could be something else.

They could be faeries, aliens, crypto creatures, shadow people, or something dark or demonic.

In addition, some paranormal activity is actually the product of something normal (but odd).

This could range from symptoms of unshielded electrical wiring (high EMF) to carbon monoxide from car exhaust or a faulty furnace. Or, the explanation could be side effects of medication, or even infrasound.

It’s important to keep this in mind. Don’t assume anything until you’ve thoroughly investigated it.

10. Not all paranormal researchers are ghost hunters.

Some people who investigate haunted sites are looking for other phenomena. During your research, if you meet another team, ask what they’re looking for, and what they’ve found, so far.

Whether or not they’re looking for ghosts, you may learn useful tips from each other.

A surprising number of “haunted” sites are associated with UFO reports, cryptozoology, and other oddities.

Be prepared to meet people looking for anomalies other than ghosts. You may discover a related subject that’s equally fascinating.

11. Ghost hunting can be dangerous.

Those locations are usually carefully examined ahead of time, to be sure there are no physical risks. That can be anything from a rickety stairway close to collapse, or bacteria lingering in an abandoned hospital, to a door that tends to close by itself and lock people in the basement.

When you explore local haunts, you may encounter hazards. That’s one reason I recommend a pre-investigation visit during daytime hours.

In addition to physical dangers, remember the spiritual risks. They include demonic activity and dark influences at “haunted” sites.  (Ghosts are not demons, but some demons pretend to be ghosts.)

The Catholic church reports increased exorcisms, and has made appropriate changes to reflect the growing need for them.

However, the church seems to interpret poltergeist activity as “demonic infestation.” (I’m more likely to categorize poltergeists as stress combined with volatile emotions plus a connection to PK, aka psychokinesis.)

You can encounter other dangers in dark, isolated places. More than once, the cover of darkness (and the thrill of ghost hunting) has attracted sexual predators. Some join ghost hunting groups and wait for fellow team members to drop their guard. This is rare, but it does happen.

Despite obvious risks, ghost hunting is still a fascinating hobby, and it can become a career.

But, above all, it should be interesting and – in most cases – fun.

If it’s not, maybe it’s time to do something else.

I’ve spent decades of standing around in uncomfortable abandoned buildings, and wandering through cold, damp cemeteries after dark.

I still look forward to every ghost hunting event, investigation, and vigil.

For me, ghost hunting means having eerie experiences at places with rich and unusual histories. And, I meet bright, wonderful researchers, too.

It’s a unique pastime, and one I’ve never regretted.

Most ghost hunters are likely to say something similar about their paranormal research, too.

13. We’re always on the brink of another discovery.

Almost every ghost investigation reveals something new about ghosts and haunted places.

At the very least, it confirms something we already suspected, or it raises new questions about “everyone knows” aspects of ghost hunting

The adventure of ghost hunting is its unpredictability. We never know what will happen next.

Every discovery (and every theory) can help us better understand ghosts and paranormal research.

I believe that’s part of its appeal, and I hope you’ll share what you’re learning as a ghost hunter.