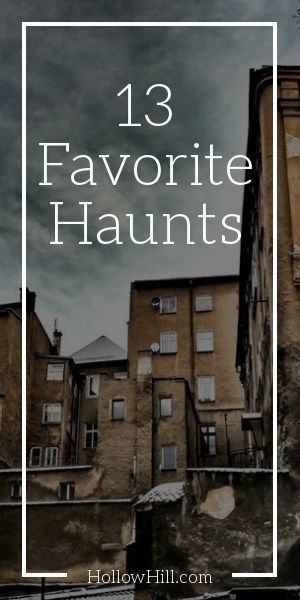 When people ask, my usual answer is, “Anywhere near your home, that’s supposed to be haunted, and you can visit it regularly.”

But, if people want to know my all-time favorite research sites, the following are on my current list.

Centuries after its gory history, and even after thousands have trekked through the site on ghost vigils, this site is still the most bizarre and eerie haunt I’ve ever experienced.

I haven’t been there since the site became “Tudor World,” under new ownership. But, on a scale of 1 to 10, that location was at least a 25 in terms of things I’ve encountered nowhere else. Nothing we witnessed was “normal” even in paranormal terms.

If you’re looking for a creepy experience you’ll never forget, I recommend this more than any other haunted site I’ve visited.

For consistent, varied, reliable anomalies, Gilson Road Cemetery was a favorite for many years.

I haven’t been there since 2014, so I’m not sure if the site’s ghostly energy has been diluted by thousands of visitors.

Back in the mid-199os, I was among the first researchers given access to the site.

It was room after room of strange energy and intense personal impressions from a wide range of ancient ghosts who lived down there.

Also, there’s something about the site that retains an unusual level of residual energy. During my visit, I “saw” modern-day figures rushing at the end of one corridor. I later learned that corridor merged with a passageway currently used as a shortcut between buildings.

You must take a (paid) tour to visit these haunts, but — if the site is still active — it’s worth every cent.

If you’re looking for a light, fun place to visit during daytime hours, Hollis’ “Blood Cemetery” is a good choice.

From vanishing, ghostly cats to daytime orbs, and from faerie rings to a sense of strong (but friendly) ghostly personalities, this cemetery is still among my top recommendations for new ghost hunters.

Blood Cemetery is strictly off-limits (and aggressively patrolled by the police) after dark.

But, even around dusk, it’s a cool, weird little place for beginners to investigate.

I’m an avid reader, so any haunt related to literature is likely to be among my favorites. At this site, the Stables are creepy and have lots of odd activity. Some of it can seem sinister.

In the main house, try to find a quiet moment near Edith’s library. Some people hear her talking aloud, in French. (I’ve heard it, and she was griping about her husband. But, at the time, I didn’t realize Edith regularly spoke in French. So — for me, anyway — that gave the experience more credibility.)

Her husband’s room is a good location for EVP or other audio activity, like with a spirit box.

Also, be sure to visit the sweet pet cemetery in back of the house. It has its own energy, and it’s a lovely place to spend a few minutes.

In the past, I’ve described the entire town as something like a theme park… but for ghost hunters.

I wrote about this in my book, The Ghosts of Austin, Texas. I took the cover photo in the daytime (no flash and no Photoshop) at Columbus City Cemetery.

In the 19th century, Columbus residents engaged in a vicious, gun-toting feud for decades. It’s the most extreme, community wide hostility I’ve ever heard about.

That left the town with residual energy and ghosts at along almost every street. Downtown, the tales are gruesome. One of the local art galleries features ghost paintings, and a ghost story of its own. The Opera House is another location worth investigating.

Columbus City Cemetery is filled with fascinating ghosts and ghost stories. There’s even a connection to the “curse of Tutankhamen.”

If you’re anywhere near Columbus, I recommend this town — and the city cemetery — for ghost hunting.

From the moment you enter the hotel lobby, look for ghosts. They’re from the 19th and 20th centuries.

The stories are quirky, too, from the haunted hotel safe (a room where valuables were stored) to the child who plays near the stairs, and from the bizarre story of the haunted mirrors in the Maximilian Room, to the ghostly rider who appears (or can be heard, faintly) on his ghostly horse.

Then there’s the guest room that was so haunted, the hotel kept it sealed for many years. And the stories about LBJ’s ghost.

I’ve also experienced the anomalies surrounding one haunted painting, and I’ve seen and heard the ghostly watchman who patrols the halls. (Don’t worry, he’s shy and definitely not dangerous.)

This hotel isn’t the only haunted place you can stay in Austin, but it’s certainly one of the best.

Haverhill’s ghosts are like Salem’s, because they include angry women who died too young, and sinister ministers who still disapprove of independent thinking.

But, in Haverhill, you can investigate ghosts with fewer crowds around you… and less blatant commercialization.

I recommend Buttonwoods (including John Ward’s house) and Pentucket Cemetery, close to it. Walnut Cemetery is another good choice, especially around the holding tomb. (They stored bodies in that raised, grassy mound when the ground was too frozen to dig graves).

Hilldale Cemetery is in a slightly different direction, but it has a rich history and ghostly apparitions.

If you’re in the area, Salem (Massachusetts) is fun to explore. But, many of its most haunted sites are either off-limits or they’ve been over-investigated. Or both. 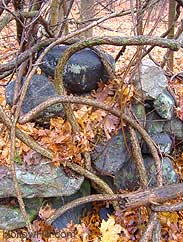 Salem Inn is reliable if you’re looking for a site to investigate overnight.

The “Witch House” is a must-see for tourists. Watch the chairs. From what I saw, most of the ghosts linger in or next to them.

Also, study the Judges Line. I’m certain some under-reported haunts are still eerie and worth investigating, if you can get permission to explore them.

Nearby Danvers, where the “witch hysteria” started… that’s another story. For now, I can share just a few tips.

For respectful, daytime investigations, visit the site where Reverend Parris lived.  That may be “ground zero” for the tragic episodes that followed. It’s also a good location for EVP… except that it’s in a residential neighborhood. Visit it anyway.

But, for investigations, I recommend Whipple Hill, which may have restricted access. I’m not sure it’s safe after dark, anyway.

During the daytime, it always seems as if I’ve stepped into a slightly different dimension. The sun isn’t as bright. Weird, gnarly roots and vines seem to appear out of nowhere. People hear voices they describe as “there, but not there, like they’re echoes from another time.”

We haven’t begun to understand the anomalies at Whipple Hill.

You’ll either love this location or think it’s boring.  For me, it’s never the same place, twice.

The site itself is a small, rectangular cement foundation. The house is gone. Its front stairs remain, close to a famous (possibly haunted) boulder dating back to Native American times. 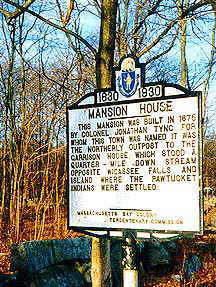 But, the real energy is on one side of the house, and slightly north. I’m not sure if the university that owns it has tidied it. It was a tangle of weeds and poison ivy during my visits. It’s also a treasure trove of the remains of the mansion and its outbuildings.

EMF spikes, weird noises, and — sometimes — an odd sense of stillness are among the anomalies at the house site.

And then there’s Tyng cemetery, nearby. It’s not great for research, because it’s on a busy street. However, the cemetery is a mystery with John Alford Tyng’s haunted grave marker, and “graves” that apparently hold no bodies.

I didn’t expect much when I arrived. The gift shop was cute, not creepy. The entire site seemed cheerful. I kept looking around and thinking, “There is no way this place is haunted.”

But then… I felt uneasy about where I’d parked my car. Something seemed wrong about it. So I moved my car to another space. And then another. I still felt uneasy, but there weren’t many other parking spaces.

My anxieties seemed groundless. I decided I was making a mountain out of a molehill. I knew no records supported the Chloe story. The “poisoned” children actually grew up and lived full lives. So, there weren’t really any ghosts at the Myrtles… were there…?

By 4 AM the next morning, I knew the Myrtles Plantation was one of the weirdest haunts I’d ever investigated.

Everything may seem fine until around 10 PM. After that, get ready for a wild night of bizarre phenomena. Some people run out, terrified, and drive away before midnight.

Get a good night’s sleep before you visit the Myrtles. You may not get a minute’s rest after the ghosts come out.

“Gentrified” neighborhoods usually have histories that included poverty, tragedy, early deaths, and violence. (It’s why they’re called “gentrified.”) Maybe they were on the “wrong side of the tracks,” or had some other disparaging description.

Research the history of the community, especially crime records, and see what stands out about “gentrified” areas. If the area has a walking tour – not just about ghosts, but history or architecture – sign up for it.

You’ll find plenty of reasons why those neighborhoods have more hauntings per square foot than most.

In the United States, I find intense hauntings at almost every 19th-century cemetery featuring lots of Irish immigrants. 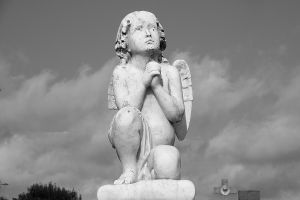 The Irish faced harsh discrimination and hard times when they arrived in America. Many of them died far too young, and in misery.

Those graves are often haunted.

But, those cemeteries are often neglected. You may have to look for them on old maps, just to find them.

Most of these cemeteries are on the fringes of cities and towns. Also, some small cemeteries (and unmarked graves) sprung up around towns where the migrant Irish helped build the railroads, or dig canals.

Most died from illness or exhaustion, or both. A few prospered, and they have their own ghost stories.

(Example: New Orleans’ famous LaLaurie Mansion is supposedly haunted by Madame LaLaurie. While tour guides represent her with a French accent, she was actually the daughter of an Irish immigrant.)

Because of isolated locations and poor maintenance — as well as local laws — old Irish immigrant cemeteries may not be safe to visit.

If they are, it’s likely you’ll encounter a ghost. Irish-American cemeteries are among the best places to see full or partial apparitions. You may only see them out of the corner of your eye, but they can be impressive, anyway.

When I need to convince a skeptic that ghosts are real, I usually take him or her to an off-the-beaten-path Irish immigrant cemetery. Skeptics want to bolt at the first apparition they see.

What are your favorite haunts? Leave a comment. I’d love to hear about your ghost hunting experiences.